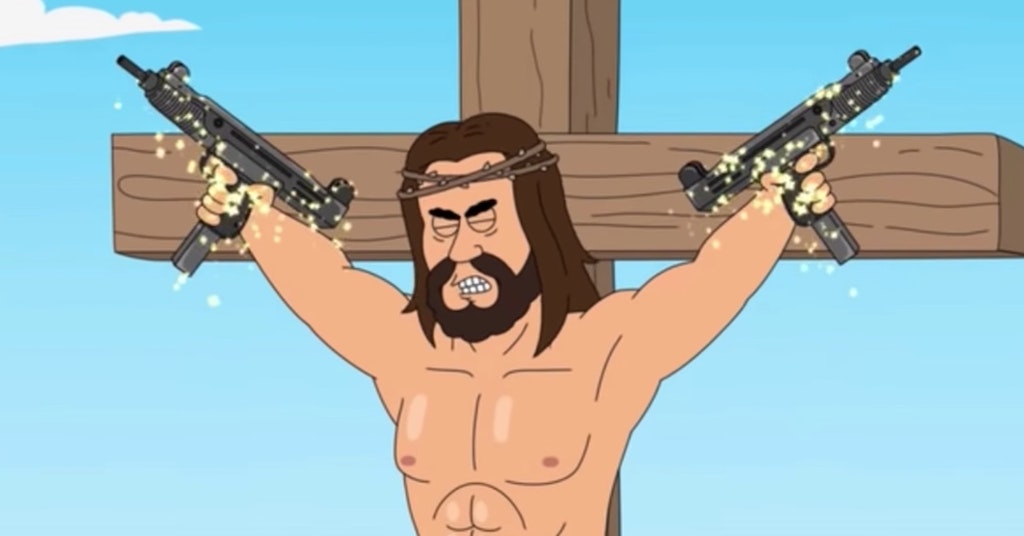 The right’s own cancel culture is at it again!

One Million Moms, the website representing nowhere near one million moms dedicated to complaining about “filth” in the media, is taking up arms against a Netflix cartoon for adults that depicted Jesus basically acting way more in line with Republican values than Biblical Jesus ever actually does.

An episode of Paradise P.D. dealing with the issue of gun safety featured the head of the NRA showing a pro-gun propaganda film “that imagines a world where Jesus had guns.”

While One Million Moms usually spends their time trying to erase LGBTQ people from all media and getting upset over comedic commercials featuring Satan, complaining about something that actually has anything to do with the religion they’re constantly trying to push on the rest of the country makes a little bit more sense.

“Jesus will not be mocked,” the campaign page reads. “Netflix’s conscious decision to air blasphemous content is a clear and repulsive display of corporate arrogance and shows complete contempt for the faith of Christians.”

Of course, One Million Moms is actually dedicated to showing contempt for people different from them, so their argument falls pretty flat when you take that into consideration.

On a more basic level, American Christians opened the door to the kind of parody Paradise P.D. is peddling when they started putting Jesus and guns on a similar pedestal in the first place. It’s not hard to find bumper stickers promoting both at the same time, and the Trump era was rife with insane artwork featuring the former president with guns and crosses, and plenty of merch was sold with a similar message.

Basically: if you want to denounce a cartoon depiction of the guy you worship going trigger happy, start by sorting out your own culture, not attacking the folks taking it to the next logical step.

On the other hand, seeing a conservative Christian group insisting that a show about police get canceled is its own source of amusement. Aren’t they supposed to back the blue?

I guess the mere 16,000 people who have signed the petition that Netflix definitely does not care about whatsoever are a little bit confused about what they actually stand for. Who would have guessed?