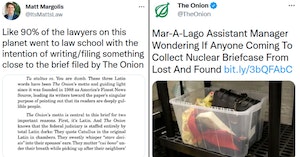 Legendary satirical news publication The Onion has filed an official amicus brief with the U.S. Supreme Court in defense of First Amendment rights in direct support of a man who was arrested for creating a parody police department Facebook page.

Anthony Novak, who mocked and criticized the police department of Parma, Ohio, is facing a Supreme Court battle. Novak was arrested after the parody page was up for just 12 hours based on the claim that people were confusing the spoof with reality.

Novak sued, but a federal appeals court ruled that the broad defense known as “qualified immunity” once again protected police from any consequences, so he’s now asking the nation’s highest court to review his case. An amicus brief is meant to provide additional information or context for an appealed case filed by an individual or organization who may have particular expertise in the subject matter.

The brief reads like a fancier and more official version of an Onion post, and likely one of their best. It opens with some clearly factually incorrect information, including claiming “a daily readership of 4.3 trillion” and that they were founded in 1756.

“On top of its journalistic pursuits, The Onion also owns and operates the majority of the world’s transoceanic shipping lanes, stands on the nation’s leading edge on matters of deforestation and strip mining, and proudly conducts tests on millions of animals daily,” it lies.

Following this, the brief goes on to argue that parody is meant to trick people into thinking that they’re engaging with accurate and truthful material so that they may later “laugh at their own gullibility.” The Parma police’s basis for arresting Novak — that people had mistaken his page and posts for real information from the department — is therefore invalid and the arrest illegal.

Others have argued that the signs that the Facebook page was a parody were clear and numerous, including a lack of verified status and a slogan reading “We No Crime” and posts claiming the cops were holding food drives to pay for teen abortions. The fact that a man was arrested for this, The Onion argues, sounds like satire itself.

“Indeed, ‘Ohio Police Officers Arrest, Prosecute Man Who Made Fun of Them on Facebook’ might sound like a headline ripped from the front pages of The Onion—albeit one that’s considerably less amusing because its subjects are real.”

The lead attorney for the team representing Novak has expressed his appreciation to The Onion, saying the brief is the best he’s ever read.

“This is the Onion’s first amicus brief, and it does a perfect job of showing and telling why parody (like the Facebook posts Anthony Novak published lampooning his local police) is a core #FirstAmendment tool,” wrote Patrick Jaicomo. “Anthony was arrested for it. Now the Onion stands with him.”

The Onion further justifies its actions in filing the amicus brief by expressing nervousness that their current staff could be the next Anthony Novaks if the lower court’s ruling is allowed to stand.

“The Onion files this brief to protect its continued ability to create fiction that may ultimately merge into reality. As the globe’s premier parodists, The Onion’s writers also have a self-serving interest in preventing political authorities from imprisoning humorists. This brief is submitted in the interest of at least mitigating their future punishment.”

It’s unclear when the Supreme Court will decide on whether or not to hear Novak’s case, but the attention brought to it by this brief may bring a sense of urgency. Even some of the world’s most serious people are praising its humor, as well as its strong legal argument.