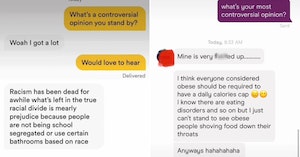 Multiple women with TikTok accounts have discovered that weeding out the good from the horrible on dating apps isn’t so hard with one simple trick—asking them for their “most controversial opinion.” At least two TikTok users have made videos showing the results of this question, demonstrating just how many bullets one can dodge by asking people to be honest about their beliefs.

To the tune of “Slipping Through My Fingers” from Mama Mia, user Amanda N, who seems to be the true brains behind this idea, shows how easy it is to out people as anti-vaxxers, racists, sexists, and generally undatable weirdos.

This video starts out strong with an individual whose controversial opinion is that “intelligence is genetic.” This isn’t particularly offensive, even if it’s reductionist at best, but with a little pressing, Amanda found out what he really meant. “Race-based I mean.”

Amanda goes on to show people with opinions such as “men and women are never going to be equal” and “bullying is good for the country,” plus she was able to dodge a potentially dangerous date with someone who hasn’t been vaccinated because he just doesn’t think it’s a “big deal.”

The very first video trying out this test question shows that some people’s answers are simply bizarre. Some guy out there apparently feels that drinking with a straw “isn’t manly,” which Amanda displayed while lip-syncing to Miley Cyrus singing “what does it mean?”

Another TikTok user and dating app frequenter took Amanda’s example and made her own video, to the same Mama Mia song, showing some arguably even worse opinions than were found in the original. It starts with a guy who thinks that mandated starvation for people considered “obese” is a good idea because he just personally hates fat people so much.

This user, who we’ll simply call “Olivia” because we see what she did there, also got quite a few heinous anti-vaxxers and COVID-deniers.

“This covid stuff was all the government!” says one potential match.

If you haven’t had enough of the bad opinions yet, get ready, because Amanda made a follow-up video after her original went viral, racking up over 8.7 million views, showing yet more terrible responses from people nobody should date. She also had to publicly apologize to one woman who messaged her to say that one of her matches in the original is (or was) her boyfriend.

Anyway, there are some real top quality nightmares in this latest batch, including the guy who thinks that anything less than government-mandated segregation isn’t racism, someone who doesn’t like “the gay stuff,” and, of course, the “Kanye 2020 guy.”

Amanda also branched out a little with her questions, asking some of the men she was matched with specifically what is their “least favorite thing about women.” Helpful hint to all the dudes out there: The correct answer to this question is definitely not “don’t get me started” when it’s coming from a woman. Also, if you’re not going to elaborate after saying you don’t think men and women are equal, don’t expect a date.

Good luck out there, everyone.