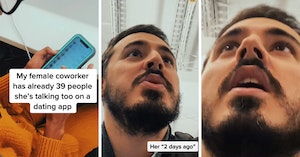 ‘It’s So Rough For Guys’—Du Claims Female Co-Worker Is Talking To 39 Guys On Hinge, Sparking Debate

As dating apps are becoming more and more popular, so too are the struggles of dating growing when you can say “yes” or “no” to someone with just the flick of a finger on your screen.

The choices can be overwhelming, and at times, unbalanced, especially when taking into account the way in which different groups use the apps. According to a study from 2016, women tend to use the apps much more quickly to match with a larger number of potential partners, while men tend to receive matches at a significantly slower rate.

TikTok user Jeremy (@lilyanddahhboosh) shared one of his coworker’s experiences on the dating app Hinge to his profile. The video has since gone viral with over 73.5k views and 4.6k likes.

In the video, Jeremy asked his female co-worker about her matches on Hinge, and she claimed to have matched and conversed with nearly 40 people in the two days she had been on the app.

Jeremy was taken aback by his co-worker’s response. “Do you realize for guys we have to wait, like, weeks to get likes, let alone a person that we are interested in to send us a ‘like’…[or,] when we send them a ‘like,’ for them to accept it?” Jeremy asked her. “We’re, like, shooting a basketball in the dark, blindfolded, backwards, and hoping that it lands in a goal that’s almost smaller than the actual ball.”

Many people in the comments agreed with him, while others said that just because she matched with that many didn’t mean they were all good matches.

One user said, “I sat with my guy friend and we did a 5 minute bumble swipe where we had to swipe on everyone. I got 55 matches he got 2. It’s so rough for guys.”

“From those 39 only like 2 are good,” another person claimed.

Another user asked, “Tell me why half the men don’t respond then when they liked you first then you accept and start a convo.”

“But it’s exhausting,” yet another said. “From 39 none will be able to follow through with consistent communication!”

These anecdotes match up pretty well with the findings from the 2016 study, which showed that not only did women receive more matches, they were also better at keeping up the conversations and following through on their matches.

In an update video, Jeremy said that his co-worker had narrowed her 39 matches down to 17, but said that people should think that men are totally hopeless in the dating scene.

A commenter said he didn’t know what to do now that he knew his match could be talking to others, but Jeremy told them, “Not all women are doing that. Just be yourself and if she doesn’t like it. Then let her go, king. Don’t change yourself for someone else.”