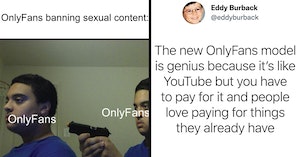 OnlyFans announced on Thursday that it would ban sexually explicit content from its site starting in October.

The creator-driven site built its platform on the backs of sex workers, who have used the site as a place to safely sell content to and interact with paying subscribers. But its growing popularity attracted a slew of people wanting to sell other types of content, including big name celebrities looking for something to do during the pandemic.

And now it appears that OnlyFans is going to capitalize on that new exposure to try to draw in venture capitalists who haven’t been interested in the site while its had such a strong connection to sex work, while also looking to comply with new and exhaustive rules MasterCard is implementing later this year.

Creators on the site have been warning that this would happen ever since Bella Thorne launched her own page on the site last August. Her activity on the site, while lucrative for both her and OF, quickly resulted in policy changes that left people worried this was the start of the end for sex workers who actually need the site to make a living safely.

And now that’s where we are. While OnlyFans has promised that they aren’t banning nudity as long as the content isn’t sexually explicit, theoretically allowing some sex workers to continue making some money off the site, that caveat already sounds uncomfortably open to interpretation.

Many people stand to lose their income from the change, and a lot of folks aren’t thrilled with the way the company is shunning those who made it what it is. Some are dealing with it through criticisms, some through humor, but everyone is blasting OF pretty hard on Twitter and it’s easy to see why.