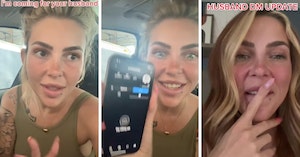 An OnlyFans model model has taken extreme measures to combat her female haters: by sliding into the DMs of their spouses and boyfriends.

The first video of the series posted to TikTok has over 4.9 million views, where model and nurse Roxy Stylez (@roxysylezz26) informed viewers she was tired of women trolling her posts and is out for revenge.

“I’m gonna message some girls’ husbands, and I’m gonna show you the responses,” Roxy said in the video. “All you women who thought it was such a good idea to comment on my video nasty things, this goes out to you. I am gonna find your husbands today, and we have the first account already picked.”

She then pulled up a second phone to scroll through her accounts to show viewers the accounts of those who she claimed left “mean” comments on her content and proceeded to message their significant others to see how they responded to her.

“I’m coming for your husband,” Roxy wrote in the video’s overlay and captioned the video, “You might wanna take a seat.”

Not everyone was impressed with the adult model’s measures, while others applauded her “vigilante” attitude.

“This is gold,” one user praised.

Another approved, saying, “This is a level of petty that I can fully support.”

Others, though, said that the video was “unhinged” and “sad,” while still more defended the model’s actions, saying the relationship was doomed from the start if her messages were enough to sway these SOs.

One person commented, “Sad thing is you’re doing them a favor.. If he is talking to you he is not worth the time.”

Roxy posted a follow-up video a few days later about the nasty comments women left on her accounts, calling her a “homewrecker” for asking in one of her videos, “Has your wife called you handsome today?”

“If your relationship is this terrible that you have to be concerned about someone from the outside coming in, he or she is not the one for you,” Roxy said. “He should be ignoring me, he should be rude to me, he should say, ‘no, I have a wife’…If that’s not the case, then I consider it fair game. […] I’m coming for you.”

The model reported in a video that one of the men never replied to her while another straight up deleted his Instagram account, but there were two men who flirted back at her.

One apparently was caught by his wife, according to Roxy, and he told her, “honestly, your looks got my attention, but after I regained focus, holy fuck, you are hilarious too.”

The other man? He decided to be a little cheeky, it appears.

“The second one said, ‘Hey there’s an account using your pics.’ I was confused and said, ‘What?’ Then he proceeds to send me a picture of space and says, ‘because you’re out of this world,’” the model said in the video. “Ladies. I don’t want your man. But if you’re mean to me, I’ll show you I can have him.”