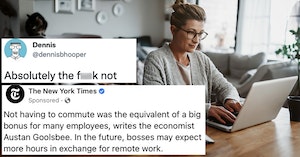 The New York Times is really excellent at enraging everyone on a regular basis and that’s what keeps them afloat. Here we are, talking about them yet again, because they’ve published something perfectly designed to make everyone on Twitter freak out. An op-ed titled, “The Battles to Come Over the Benefits of Working From Home” has gone viral as people respond to the very idea that employers might just try to take advantage of their employees.

They posted the article to Twitter with a short synopsis reading, “Not having to commute was the equivalent of a big bonus for many employees, writes economist Austin Goolsbee. In the future, bosses may expect more hours in exchange for remote work.”

This is pretty much how people feel about that:

The actual piece does not fully advocate for this, it more covers the change in quarantine life and working from home and having just a little bit of extra time to yourself instead of sitting in a car for an hour to just sit in a cubicle for hours. And it ends on a pretty sour note, implying that employers will win in the end and make us all as miserable as possible:

Beyond the subtleties, though, the basic issue is simple. Corporations claim a greater share of the national economy than ever before. If the last 40 years of productivity growth ended up benefiting shareholders and corporate profits more than it did wages, the same thing could very well happen with the newfound productivity benefits and time savings of working from home.

So now may be the perfect time to savor the little things — reading the newspaper in your pajamas, having an extra cup of coffee and simply not having to deal with traffic. Just know that even if you aren’t wearing real pants, your employer may soon be telling you to get back to work.

Unfortunately, it does seem like corporations are winning in the battle for ruining everyone’s lives, but the response online hints at an imminent rebellion:

What can I say except: