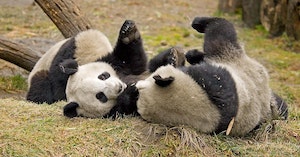 Although the coronavirus pandemic is, of course, a massive human tragedy, we need to look for silver linings amid this crisis if we want to make it through. One unexpected positive came out of Hong Kong on Monday when, after 10 years of trying to figure it out, two captive giant pandas finally successfully mated with each other.

Ying Ying and Le Le, two giant pandas who could never quite get in the mood over 13 years of living together in a Hong Kong zoo, successfully mated on Monday, a rare feat for the famously low-libido species https://t.co/ngdA6zIzHB

Many are attributing this rare act of panda whoopie to the fact that the Ocean Park Zoo in Hong Kong, the home of Ying Ying and Le Le, has been closed to visitors since late January due to the coronavirus outbreak. It’s hard to say for sure if the constant presence of multiple humans hanging around was what was killing the mood, but what we do know is that they finally got it on.

The press release from Ocean Park also states that the pair started showing signs of increased interest in the nookie by late March, which tends to be the start of the natural giant panda mating season.

“Since late March, Ying Ying began spending more time playing in the water, while Le Le has been leaving scent-markings around his habitat and searching the area for Ying Ying’s scent,” the announcement reads

“The successful natural mating process today is extremely exciting for all of us, as the chance of pregnancy via natural mating is higher than by artificial insemination,” reports Michael Boos, Ocean Park’s executive director for zoological operations and conservation. “If successful, signs of pregnancy, including hormonal level fluctuations and behavioural changes may be observed as early as late June, though there is always a chance that Ying Ying could experience a pseudo-pregnancy.”

Natural mating and pregnancy among giant pandas is notoriously difficult, especially in captivity, as the species has an unusually low libido, preferring to spend time eating bamboo and rolling around being adorable. Perhaps this success will provide better insight into the kind of environment pandas prefer to do it in.

Regardless, this is some sorely-needed good news, as well as fodder for panda sex jokes.

What do you call a panda quickie?
Panda Express

If the tables were turned- you can kinda understand why!? pic.twitter.com/Ko24ukZpv6

“Everybody’s dying so why not?”

13 years of seduction. Whew! Hope it was finally worth it. pic.twitter.com/UOY0qtFIme

Maybe Mrs. Panda was holding out for something better: pic.twitter.com/bziW1C80RL

Pandas getting more frequent action than me

I, for one, am thankful these Pandas took time away from their busy Kung Fu schedule to find some alone time for themselves.

Congrats to Ying Ying and Le Le. Hope a baby panda is on the way.