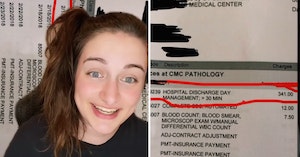 TikToker Confirms Video About U.S. Parents Being Charged For Child’s Death Is No Joke

A TikTok user had a very sad story to go along with a video that was supposed to be a joke but unfortunately turned out to be a little too close to the truth.

The original video shows a young individual acting out a scene at any U.S. hospital, with a grieving parent crying because their kid had just died and then the nurse in a weird sing-song computer voice directing them to “insert cash or select payment type.”

Another user who goes by “Linzathy” jumped off from this to tell the story of how, after she lost her baby in the hospital, she was charged $341 for the benefit of having a doctor come in to confirm that the child was dead and signing the death certificate.

“Okay, but no, this actually happened,” says Linzathy. “I lost a daughter in America and this is the bill they sent me after she died.”

The hospital bill in the background shows standard charges for things like a blood smear, as well as one item for “hospital discharge day management” for over 30 minutes, which was what she was charged $341 for. She says, however, that it was really for a period of less than 30 seconds.

“She was not discharged, she died, but…” says the TikToker. “Anyway, what they charged for was the doctor coming in, because he was not in the room when she passed, and him listening to her heart, or lack thereof, heartbeat, for less than like five seconds. So that was $350, and we already knew she had passed.”

“You would think after spending $2 million on her medical expenses that the death would be free.”

In a follow-up video, Linzathy added that the absurd charge was not the fault of the doctor himself, but of the overall U.S. healthcare system.

She works in the industry as well and is well aware that it’s the health insurance companies and others trying to make a profit literally off of people’s lives and well being that caused her to be charged for the brief confirmation that her daughter was dead.

“I love healthcare,” she says. “It’s a basic human right, honestly. The issue is, it’s not accessible and affordable.”

She also clarified that because she did have health insurance, everything was covered after their $4,000 per year deductible was paid down, so she didn’t actually pay $2 million out of pocket. Still, that is a lot of money for the vast majority of U.S. households to pay in order to attempt to keep her baby alive, and even though her insurance was the one to pay the $341 for a death confirmation, that is still a thing that exists.

Aside from commenters being rude about technicalities, as always, those chiming in largely expressed sadness and anger for Linzathy around the situation that the U.S. healthcare system put her through in order to obscenely enrich a few individuals. And, of course, there were the many people with their own horror stories and massive bill totals.

“I’m so sorry for your loss,” said one user. “America’s medical system is completely broken and nobody knows how bad it truly is until living somewhere else.”

“We received bills for $1000s for the daily bloodwork required to make sure I miscarried totally,” wrote another. “They really enjoy adding insult to injury.”