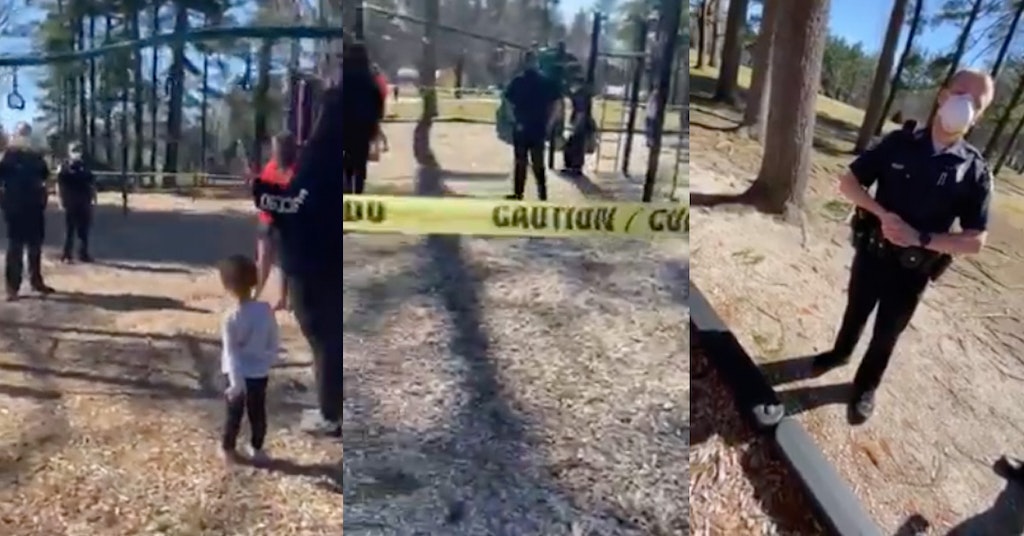 Parents Refuse To Leave Playground, Call Cops “Nazis” And Cough At Them For Enforcing COVID-19 Closure

A video showing adults refusing to leave a playground despite police intervention has sparked outrage in Concord, New Hampshire.

Rollins Park is one of many playgrounds across the country that is closed off due to coronavirus concerns. It’s been roped off with caution tape as part of the state of emergency, but that didn’t stop a number of parents from bringing their children anyway last week.

A video, recorded by one of the parents, captured an 11-minute long incident in which the police showed up and explained the playground closure but were met with hostility, and even called “Concord Nazis.”

“The governor’s orders do not surpass the Constitution of the United States,” one man insisted.

Despite the parents’ repeated refusal to comply with police orders, the officers remained calm and continued to explain

“You would literally be the people that rounded up the Jews in the cars,” he added later, as the woman recording screamed “You’re not serving and you’re not protecting!”

The officers finally left after one of the parents began aggressively and purposely coughing in their direction.

The incident has caused concern over a recent school board election.

One of the people involved in the confrontation with police was Rochelle Kelley, a newly elected member of the We are School Board. According to the New Hampshire Union Leader, Kelley was the one filming the incident, and insisting to police that any tickets they wrote for disorderly conduct would be escalated to the Supreme Court.

After the video was shared on Facebook, a petition began circulating calling for her resignation.

“[Ms. Kelley and company] disobeyed the order and stayed [on the playground]. They finally complied, but only after Ms. Kelley or others in her presence called the officers Nazis, told them they were crackheads, and argued with the officers in a disrespectful manner,” the petition reads. “Later Ms. Kelley posted videos of the confrontation on Facebook to boast about the run-in.”

The petition goes on to express concern in Kelley’s “ability to objectively, civilly, and maturely advocate for the children of We are and its taxpayers.”

The school board has said they are unable to remove her.

“Ms. Kelley’s actions did not involve district or school board business, although the actions do impact the district’s and board’s image, which is unfortunate,” said School Board Chair Wendy Curry, while noting that the board doesn’t have the power to remove an individual.

But Kelley, so far, is refusing to resign.

“I was just trying to have a conversation with [the officers], which I now realize was stupid,” she said. She also claims that she didn’t know anyone with her was calling the cops Nazis, despite appearing to add “I would say that’s exactly how you’re acting right now” during one such moment.

The incident comes not long after a high profile confrontation with police at another playground closed due to COVID-19 during which one mother was arrested, setting off protests organized by alt-right figureheads.

None of the playground goers in Concord were arrested at the time of the confrontation, though police are reportedly considering bringing charges against the person who coughed at them.