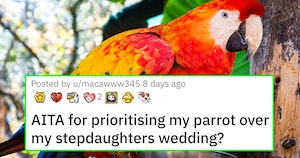 Owner of perhaps the single best Reddit username on AITA, u/macawww345, wants to know if he was a jerk for picking his parrot over his stepdaughter. I can’t fathom a situation in which he wouldn’t be, but I do love being surprised.

OP starts by saying she’s the owner of a rescued macaw who was from an abusive home.

So I’m the owner of a wonderful rescued macaw. She is a wonderful bird but has a lot of issues due to an abusive former home. I’ve had her for 3 years and since then haven’t taken any vacations or trips away as it would be too disruptive for her.

This bird is very skittish and dependent on OP. She is happy to make sacrifices.

She distrusts everyone and is very reliant on her routine. I love her deeply and I’m happy to make sacrifices for her. They are permanent toddlers and very intelligent birds.

When OP met her husband, his children were a bit older. The stepdaughter went to college right around the time OP got married, but they had an okay relationship.

I met my husband by the time his kids were older, my stepdaughter was 16 at the time. We married when she moved away for college. Nevertheless I thought we’d managed to have a decent relationship, until now… my stepdaughter is getting married in March, and naturally there’s a lot of preparation involved.

The daughter wants a huge wedding and is very stressed. She invited her stepmother to visit and help, but OP declined because of the parrot.

They’re wanting a huge traditional wedding and she is stressed out of her mind. They live out of state, and she invited me recently to come visit her for a week to help make wedding plans and spend time with their 2yo. I declined and she insisted to know why, acting very hurt, and I explained the parrot… Well jt all went downhill from there.

The stepdaughter got upset and complained to her father about how OP never accepted her and was snubbing her for a pet.

She caused a massive fuss with her dad, saying she never got a mother figure and I never accepted her as my full blood daughter and this is the ultimate snub for a silly animal. That I’m cold and emotionless… I feel really hurt and I can tell he agrees with her even though he’s refusing to take sides.

The husband is trying to stay out of it and OP doesn’t get why she’s being asked to bond.

But I don’t see why I should be expected to take holiday time off work to babysit and “bond” all of a sudden and I don’t see how I’m a monster for this… am I the asshole here?

OP explains that the relationship was never really close.

Edit: context of our relationship, we don’t usually talk at all and she hasn’t visited home in 4 years.

OP also added an edit that she understands that this may be a bit more complex than she was able to communicate.

Edit 2: Beginning to think it was maybe a mistake posting this. Mostly because this is a real and nuanced situation and reddit is no place for nuance, and maybe personal relationships shouldn’t be judged in the AH context in the first place. But also because I should be more understanding and a bigger person regardless of who is or isn’t the asshole. Life is too short to be butthurt and offended.

She finally says that she was the bigger person because life is too short – she called her stepdaughter and offered to help as much as possible.

I called my stepdaughter and told her that I understand this is a big moment in her life and she wants someone there to help and support her, and that I’m still willing to help her in any way I can to plan the wedding via zoom and virtually.

They had a conversation about why the daughter never accepted OP reaching out before and the daughter says she realized she was wrong to push OP away and wanted a positive relationship.

We talked a bit and I asked her why she hadn’t accepted me reaching out in the past and she apologised and said she didn’t want to accept someone as a stand-in, “fake” replacement for her bio mom, but now she regrets it and would like a closer relationship, especially seeing how close her SO is with his mom.

The end of the discussion was all around wonderful and it sounds like this was just a net good for OP and her family!

We ended the conversation positively and I’m hoping things can improve going forward. I told her I’m a crazy bird lady and asked her if she still wants a relationship knowing that and she said that after the wedding she’s willing to travel to visit us if we have room… which we do. I’ll leave this post up but I’m happy either way and I’m glad the feedback here motivated me to make the call.

We did have a voice of reason on Reddit wondering how OP was literally never leaving the bird again, citing “that is not healthy”. OP answered that she’s working to heal the trauma and get the bird to be more independent, it will just take time!

Another person called out something I noticed too, “you are already associating *bonding* as being a free babysitter. Also, a last minute one at that. Maybe it’s true, maybe it’s not. Just sounded a little callous, but then again you are NOT obligated to be her babysitter. NTA.”