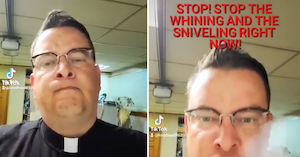 There is a certain type of American Christian that likes to think they are being oppressed, that their rights are being trampled, and that they are losing power quickly. Obviously Christianity is the major religion in America, with a number of different sects and lots of influence in politics and the media.

So, if any Christian says they are being shoved in the basement for their beliefs, please feel free to laugh at them — or tell them off, like this pastor on TikTok.

The pastor, who goes by the TikTok handle of knothead9620 calls himself a “Feral Lutheran Pastor.” His TikTok page is filled with videos where he discusses faith, gay and trans rights, and issues related to the church. In one particular video, which has gone viral on Twitter, he has words for Christians who profess oppression.

“Stop the whining and sniveling right now,” he begins as he rolls up what looks like a newspaper and uses it the emphasize his words.

“You’re whining and crying because what? Because nobody’s letting you treat gay people like sh*t anymore?”

Folks on Twitter wondered whether or not the pastor was actually real, which the OP chose to comment on:

Others praised the pastor’s words.

The Pastor took to Twitter himself to clarify some things:

Apparently, he also makes pens and other arts and crafts!