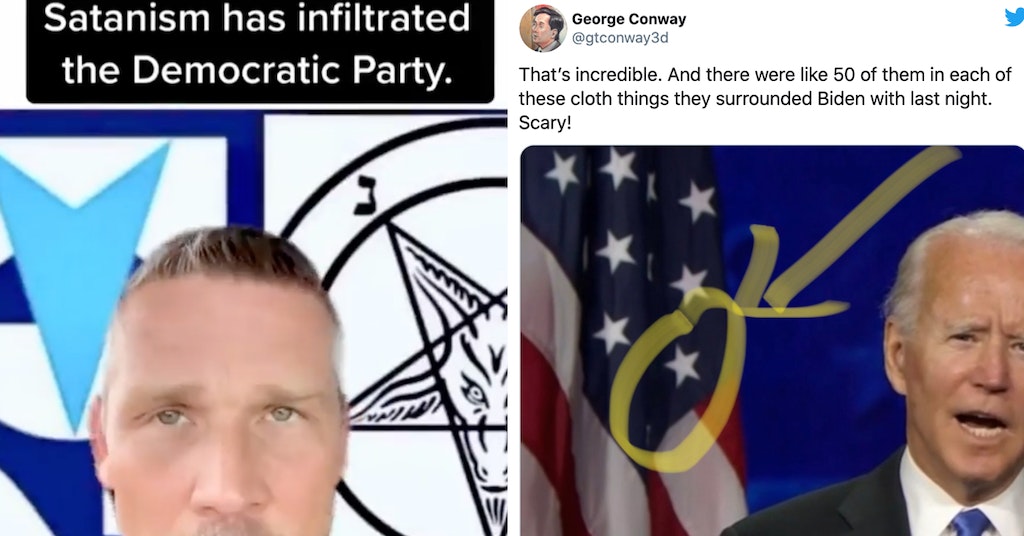 
Pastor Greg Locke is a con-artist masquerading as a man of god who makes a living off targeting vulnerable people with wacky conspiracy theories. He also love to post incendiary things and then watch the commenters go wild. There are religious people who believe in a literal devil and the power of evil, and while I don’t subscribe to their beliefs, I do think they are sincere.

I don’t think Locke was being sincere when he tweeted, “I suppose it’s ‘just a coincidence’ that the #DemConvention logo turned sideways has the EXACT same design and measurements as another familiar logo. Satanism is alive and well.”

I suppose it’s “just a coincidence” that the #DemConvention logo turned sideways has the EXACT same design and measurements as another familiar logo. Satanism is alive and well. pic.twitter.com/zkyuNjOxmg

Yes, the damning symbol of a *check notes* star. Not a common pattern or shape anywhere except satanism! Locke is likely trying to attract the kind of people who are more interested in believing a pedophile ring runs the country than in climate change, but at least people had some fun dunking on him with images of all the other stars there are to be found, like in the American Flag or the Republican logo:

this guy is a fucking nutjob. https://t.co/uMeMikp0fl

That’s incredible. And there were like 50 of them in each of these cloth things they surrounded Biden with last night. Scary! https://t.co/qNgxQL66D0 pic.twitter.com/cqrWK3vY6g

Did you know that if we turn you sideways you are still a batshit crazy fake Christian imbecile? https://t.co/o7KFzXNrm4

And yes, satanists do officially exist, with their own temples and everything. Some might be Democrats, but I suspect most are far more left than the DNC.

Locke has responded on Instagram, though it’s less a defense and full-throated assertion that satanism is real, it’s a problem, and it’s an important part of the graphic designer’s repertoire:

The lesson here is really that you can take any basic shape and cram a drawing of a goat inside.