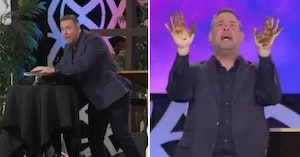 Pastor Crams His Hands Into Pile Of Dog Crap To Prove A Point About Sin, Or Something

A recent sermon by California Pastor Dan Burgoyne landed on the Twitter account “Christian Nightmares” for reasons that become evident about five seconds into the clip as it becomes clear that yes, that is actually a plate piled high with dog droppings on the table next to him. The preacher was making a point about how God sees sin on a person’s soul after pointing out that the Bible often compares the concept of “sin” to things like dirt, filth, and even feces.

Did he need to rub his hands on the pile of dog poop in order to make his point? No, he didn’t, but yes, he did it anyway.

“No, this is not a brownie,” says Burgoyne about the platter of brown stuff next to him, to nervous laughter from the congregation. “No, this is not Snickers bar. I’ve owned two Bullmastiffs in my life. This is Great Dane.”

And so, for reasons beyond comprehension, the pastor plops both of his hands down right on the pile of Great Dane s–t and rubs them around, to the horror of the other people in the room. The best reaction by far is the guy who shouts “hey” twice as though he thinks maybe somehow Burgoyne didn’t realize what he was doing. Regardless, the pastor goes on to grope the poop a few times before lifting his hands to show everyone how covered they are with feces.

It’s unclear if Burgoyne was comparing the “you” in that last statement to dog poop, basically saying that all humans are s–t without God, but that’s kind of what it sounds like. Either way, it seems like the point of “God doesn’t want you to sin because he thinks it’s gross” could have been made without putting any hands in any poop. Of course, it’s too late for that now, because he already did it.

And thanks to Christian Nightmares, we had to see it.