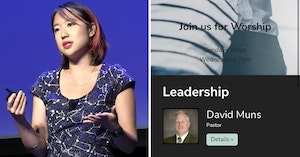 Michigan pastor David Muns was put on blast after he sent a disturbingly racist, Islamophobic, and misogynistic hate email to South Korean journalist Sarah Jeong that appeared to threaten her and others with the practice widely known as “female circumcision.”

“How about if we took all the little bitter Asian woman and had a lottery and cut their clits off like the Muslims do,” Muns wrote. “Not a very classy position is it, neither is your trashy little bitter personality towards white men. Only in a world where journalism is controlled by brain dead Liberals do you people even have jobs.”

Jeong commented that although she gets a lot of hate mail, because Muns is a religious leader, she felt it necessary.

“You would be surprised at how many people send me these kinds of messages from their work emails,” she said. “But using the domain for your online church is a new low, and yes, I am going post your email on the internet.”

The email was reportedly in reference to a meme that has been circulating among conservatives since 2018 which incorrectly attributes a quote to Jeong about hoping “bald white kids” have leukemia. Snopes has rated this claim to be false and Jeong has, of course, denied ever saying anything like it. The meme was found to have originated on 4chan message boards that used the same format to invent other offensive things Jeong never said.

It’s unclear why Muns jumped from that meme to suggesting a bunch of women be subject to having their clitorises cut, as is the cultural practice of some cultures in the Middle East and Africa, some of which follow a sect of the Muslim religion. Not all Muslims follow this practice, obviously.

When contacted, Muns told the Daily Dot that he “issued a very sincere apology” to Jeong. Although he called his email “terrible” in an interview with Click on Detroit, he didn’t seem to be entirely remorseful, making excuses for what he did.

“I was simply asking the young lady, ‘How would you feel if this were said about you?’” he said. “To call out white men like that… We don’t need any more fuel on the race issues in the U.S.”

This argument falls a bit flat when you remember that Jeong never said that. He also claimed that a “reliable source” told him the quote was real. Additionally, he called his congregation “biracial,” which would indicate that there are only people of two races going to his church.

Needless to say, Jeong’s fans are not impressed with Muns right now and are happy to help share the words he supposedly regrets across Twitter.