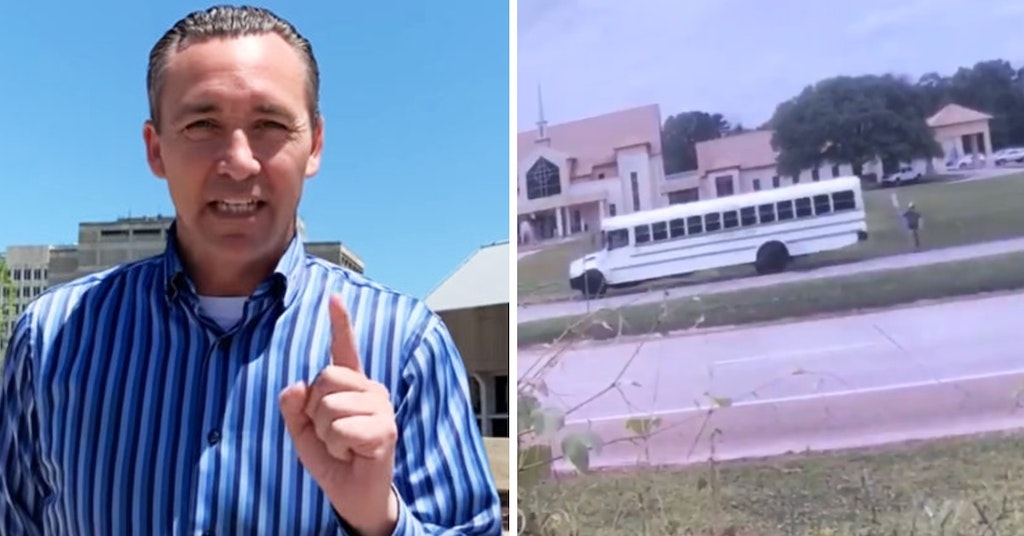 Pastor Tony Spell of the Life Tabernacle Church in Louisiana turned himself in after a warrant was issued for his arrest following the release of a video showing him rapidly backing his church bus toward a single protester and stopping just a couple of feet short of hitting him.

Spell is one of multiple church leaders who has gained attention recently for refusing to follow social distancing orders and continuing to hold public services with too many people too close together. He has also been charged with violating these orders.

A single protester, local man Trey Bennett, has been protesting Spell’s defiance of stay-at-home orders outside of the church for three weeks. CBS affiliate WAFB was able to obtain security footage showing the incident that resulted in aggravated assault charges.

#BREAKING Central Pastor Tony Spell has a warrant out for his arrest for an incident with a protestor that happened on Sunday. Watch below. ⬇️ ⬇️⬇️ @BRProudNews pic.twitter.com/mEaSJkPpt5

Although Spell clearly did not hit Bennett, using a vehicle to intimidate someone in this manner is still considered assault, and he sure was backing up that bus faster than most people would back up busses. Some of the statements made by Spell aren’t working in his favor, either.

“That man has been in front of my church driveway for three weeks now,” Spell said according to CBS. “He shoots people obscene finger gestures and shouts vulgarities.”

“I was pulling in from my bus route, picking up black children who haven’t eaten because of this sinister policy that has closed schools. I was going to approach this gentleman and ask him to leave.”

He also said that his wife convinced him not to confront Bennett face to face. So apparently he decided to confront him face to bus? Allegedly.

Spell has been charged with one count of aggravated assault and one count of improper reversing. Presumably, he will also be charged with violating state bans on large gatherings. He would not be the first pastor to face those charges.

This is the same guy who told his followers to donate their entire stimulus checks to his church, so for many, this arrest is good news.

Turn the other “wheel”. – Jesus

I dont think that Jesus would approve. Maybe Tony isnt familiar with the New Testament.

Not a big “Love thy neighbor” guy huh?

These so called Christian’s are so full of God’s love, aren’t they? No wonder there’s a stairway to heaven but a highway to hell.

There’s also a highway to prison.