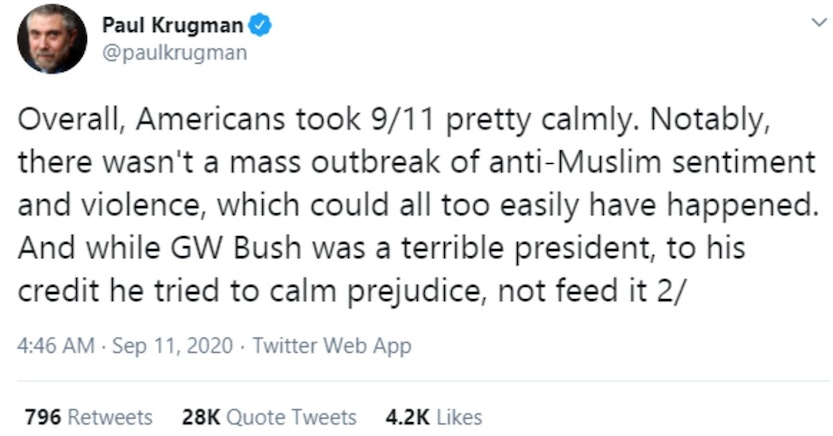 Nobel laureate, economist, and New York Times columnist Paul Krugman is usually a left-wing darling, but his recent tweet claiming that “there wasn’t a mass outbreak of anti-Muslim sentiment and violence” right after 9/11 is not sitting well. On a Twitter thread looking back at that day 19 years ago, he also said that “Americans took 9/11 pretty calmly” and that George W. Bush “tried to calm prejudice, not feed it.”

A lot of other people, particularly Muslim Americans, do not remember it that way.

This particular part of the thread is quickly gaining a lot of rather negative attention, with the number of comments already outpacing likes and threatening to overtake retweets. It appears Paul Krugman has officially been ratio’d.

In direct contrast to Krugman’s statements, Twitter has already put out a fact-check, noting that FBI data clearly shows that a massive spike in anti-Muslim hate crimes in 2001 — reaching 481 incidents compared to 28 in 2000.

In the week following 9/11, the FBI was recording 20 anti-Muslim hate crimes every day.

In addition to this data, many Muslim Americans and others who have been mistaken for Muslim are continuing the annual tradition of sharing their experiences with Islamophobia after the attacks. Many of their stories are deeply tragic.

Others have pointed out that the Iraq War, which was a direct result of the 9/11 attacks, killed hundreds of thousands of Iraqi civilians. Today, Iraqis still live with the aftermath of the extensive bombing of their homes, including babies born with serious deformities due to the sheer amount of radiation left by these attacks.

Although Krugman may not list “historian” among his extensive list of skills and accomplishments, many people younger than him seem to remember the days after 9/11 better and are baffled as to how the Nobel laureate got this so wrong.

As of this article’s publishing, Krugman has not responded to the backlash.