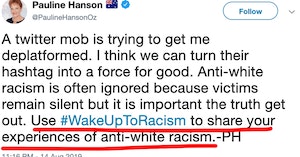 Pauline Hanson, founder of the right-wing “One Nation” party in Australia, took to Twitter Wednesday to complain that a “mob” was trying to get her “deplatformed,” and that she wanted to use their hashtag #WakeUpToRacism “for good.” Because, apparently, waking up to actual racism is not good. Instead, she wants people to “share your experiences of anti-white racism.”

A twitter mob is trying to get me deplatformed. I think we can turn their hashtag into a force for good. Anti-white racism is often ignored because victims remain silent but it is important the truth get out. Use #WakeUpToRacism to share your experiences of anti-white racism.-PH

Hanson, currently a Senator for Queensland since 2016, has consistently railed against immigration and multiculturalism during her political career (when she wasn’t in jail for electoral fraud) and in 2006, called all African migrants “diseased.” She also called for an Australian Muslim ban after the 2016 Orlando nightclub shooting.

But sure, let’s talk about “anti-white racism.” Twitter users certainly have some feelings to share on the idea, and here are some of the best:

I was living in a share house and someone nicked my entire season 6 box-set of Star Trek: The Next Generation and season two of The West Wing #AntiWhiteRacism

I was loudly mispronouncing items on the menu at a Mexican restaurant recently and the waiter had the gall to roll his eyes. #WakeUpToRacism https://t.co/UkBOOjupvr

One time, I angrily yelled at someone “DO YOU KNOW WHO MY FATHER IS?” And they didn’t know….

I tried to buy make-up and there were only 13 shades of white. #WakeUpToRacism pic.twitter.com/vKviFHMR9x

I am also treated differently as a white woman. I was pulled over 3 times in the last 2 months and NOT ONCE were there any guns drawn on me. I actually felt no fear reaching for my license. Can you believe that? I didn’t even get any tickets. ????????‍♀️ #wakeuptoracism

I #WakeUpToRacism every morning when I look at Donald Trump’s twitter feed.

When this anti-white movie was released In the early 90’s, my high school team mates almost used it to discriminate against me. I’m sure it would have been much worse if they weren’t all white themselves. #WakeUpToRacism pic.twitter.com/FTHDL6jwAa

Tried to do a video call with a pet but the pet was disinterested, so couldn’t share a screenshot of the video call on Instagram. #AntiWhiteRacism

I went to Mexico once, and a man approached me, just expecting me to understand what he was saying!

I mean, he wasn’t speaking Spanish or anything, but English with a HEAVY accent.

So I angrily took the towel he was offering me and went to another part of the resort.

Yet, this privileged, Australian white supremacist & religious bigot is gaslighting about racism against wypipo. https://t.co/eo2HgZRU6J

A medical doctor refused to colour my blood white, so now when get my shots everything looks like “The Shining” #WakeUpToRacism pic.twitter.com/bwrXNtTEcy

I’m definitely treated differently for being white. Last month for instance, I sailed through immigration checks in Australia, USA and Canada while my brown friends were treated like terrorists and given the 3rd degree everywhere we went. #WakeUpToRacism

Mum wouldn’t give me an extension on a loan to buy my 3rd investment property. #wakeuptoracism

whenever the girlies say i’m pretty fly they always add the proviso “for a white guy” #wakeuptoracism pic.twitter.com/hQ5G124N8x

I was attacked mercilessly for following my dream and opening a sushi-pizza restaurant. #WakeUpToRacism

The lady at my favourite Bahn mi shop didn’t think I could handle extra chilli. #wakeuptoracism

I've never missed out on a job or an opportunity because I'm white and it's unfair I have nothing to complain about @PaulineHansonOz. #wakeuptoracism pic.twitter.com/Bjfdu4CRTz

Racists:
Racism isn’t real.
It’s PC gone mad.
Ppl are too soft and it’s their fault if they choose to be offended.
I refuse to listen to non-white voices.

Also racists: Speaking out against all the racist shit I say is anti-white racism and is white genocide! #WakeUpToRacism https://t.co/NmwsPfVsLF

Here I was, minding my own business, when these people (who were clearly NOT from our neighbourhood) had the audacity to break out a bbq. They then filmed me calling the police like I’m a zoo creature. Harrowing ordeal. Be brave and speak up people#WakeUpToRacism

The Woolies near me doesn’t have the mayonnaise I like. I have to go to the one at Ashfield. #wakeuptoracism

every time i go out in public covered entirely in mashed potatoes — as is my culture — i am cruelly harassed by various sea birds!!!! #WakeUpToRacism

Is she deplatformed yet?