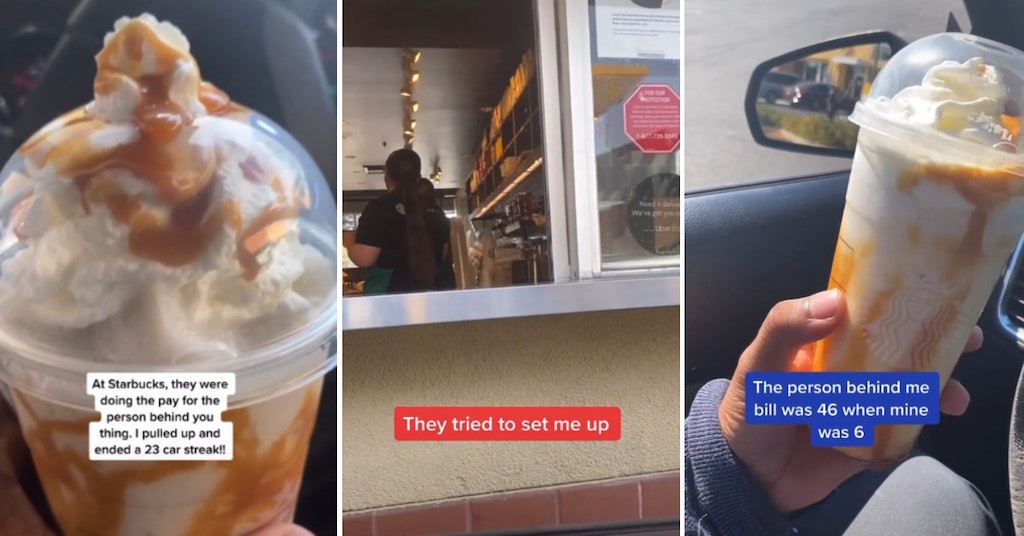 A Starbucks customer had a small crisis of conscience recently, displayed in a TikTok video he posted to ask followers if he was wrong for breaking a 23-car streak in a Starbucks “pay it forward” line in which customers pay for the order of the person behind them in the drive-thru line. He can perhaps be forgiven for not participating in what is seen by many as an act of generosity considering the fact that the order behind him totaled $46 when his own order was just $6.

“How y’all feel about this am I wrong?” asked TikTok user Mac Tray in the video description. “What would y’all have done?”

“At Starbucks, they were doing the pay for the person behind you thing,” says the video’s voiceover. “I pulled up and ended a 23-car streak!!”

The “pay it forward” program at Starbucks ended up being the surprising subject of controversy in recent months as former and current baristas started speaking out against it, complaining that it disrupted their usual routine and was a general pain, especially during busy times of the day. Not only that, but many reasoned that people pulling up to Starbucks clearly had the money to pay for their order already, and that generosity would be better off going to underpaid and overworked baristas in the form of tips.

“As an ex barista you should use that money that would have gone to your total to tip the baristas,” said one commenter on Tray’s video.

“I had a barista beg me to not keep the chain going Bc she said it was too complicated lol,” wrote another.

Another point against this practice could easily be the guilt people apparently experience for breaking pay it forward streaks even when continuing one would require handing over $40 more than they’d intended to pay for coffee on that day. Other commenters expressed feeling that these chains are pointless because only the first person in the chain is really being generous and only the last person benefits, with others just paying random amounts for coffee often out of a feeling of obligation.

TikTok users, in this case, seem to be leaning heavily in favor of Tray not being a bad person for ending this streak, with many saying they would have done the same or have ended them for bills much smaller than $46, or would have instead tipped the Starbucks workers $6.

“I ain’t paying for anyone,” said one user. “Starbucks is a treat from me to me.”

“Yeah I never do pay it forward,” said another. “I’ll just tip the baristas.”

Tray’s video has gained over 3.5 million views in the past five days, and if you were wondering, his drink was a vanilla bean frappuccino with almond milk and a caramel drizzle.