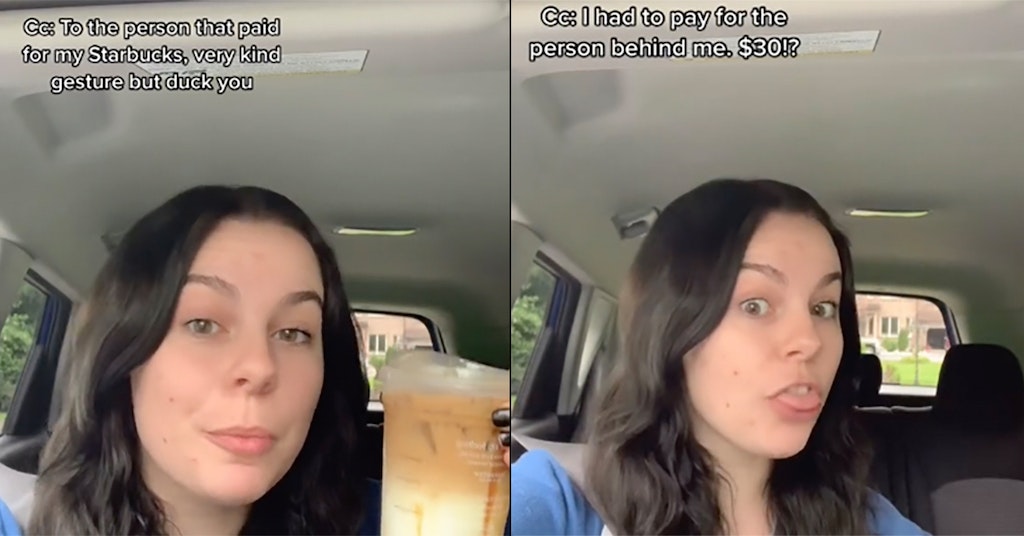 A TikToker went to the platform to complain about how her experience with ‘Pay It Forward’ went awry at a Starbucks. Though she claimed it was a joke, some people took it seriously and had a debate about the merits of ‘Pay It Forward’ right on her comments page.

In the video, which has text captions throughout, she addresses her rant to “the person who paid for my Starbucks.”

While she shows appreciation for the person who “paid it forward” for her benefit, she explains how that backfired.

“Very kind gesture, but f—k you,” she declared.

Some didn’t think she was joking, however, and faulted her for not being more receptive to the gesture.

“That’s your fault,” one finger-pointed said. “I have anxiety and accepted the kind gesture without paying for the person behind me. It defeats the purpose.”

Another person came in with a different brand of chiding. “Don’t pay it forward at Starbucks,” that person remarked. “People who go to Starbucks really DON’T NEED it! Give your money to the homeless people or anyone that doesn’t drink Starbucks.”

Yet another person commented, “Oh, wow, you’re mad because someone was trying to be a nice person? If you have $30 to spend, do it! If not, just say no. Don’t say being nice is a scam.”

That last comment actually got a “rawr” from the TikToker in response. But she also got some “supportive” comments from people who were also anti-‘pay it forward.’

“Can we normalize saying thanks and going away?” one person asked in the comments. Another assessed, “The people in these comments do not understand anxiety.”

But the creator might argue that the people leaping into the comments do not understand humor.

One person appeared to get it, saying, “The comments don’t pass the vibe check. Like, chill, it’s called a joke,” adding a crying emoji. The TikToker responded with a simple, “I’m scared.”