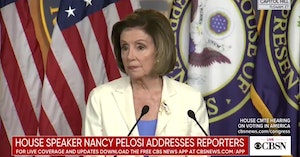 Speaker of the House Nancy Pelosi has formally announced the creation of a select committee that will investigate the assault on the Capitol that occurred on January 6, as well as the events leading up to it, after senate Republicans filibustered and voted down an independent committee.

“This morning, with great solemnity and sadness, I am announcing the House will be establishing a select committee on the January 6th insurrection,” Pelosi said at a press conference.

“January 6th was one of the darkest days in our nation’s history,” she added. “It is imperative that we establish the truth of that day and ensure an attack of that kind cannot happen, and that we root out the causes of it all.”

This announcement was expected after Democratic attempts to create an independent, bipartisan committee were shot down by Republicans, who claimed that such a thing would be too political and likely to make them look bad. They have also argued that it would be a waste of resources in spite of repeatedly demanding an investigation into the death of Ashli Babbitt, who was shot and killed by a Capitol police officer as she attempted to climb through a broken window toward a group of evacuating congress members.

Without Republican support for the thing they say they don’t want but also kind of do but only if it makes them look like martyrs instead of the people who made it happen, the launching of a select committee from the House was considered all but inevitable. Pelosi did not specify who will be on the committee or whether any Republicans would be included, though 35 House Republicans did vote in favor of the independent committee, only that it “will investigate and report on the facts and the causes of the attack.”

“I’m not going into what the committee will do; that’s up to the committee to make their determination,” said Pelosi. “But it is clear that the Republicans are afraid of the truth.”

While the political left in the U.S. is rather pleased at how this played out, feeling that a select committee not hindered by Republicans will have more success in discovering the root causes of the insurrection, right-wingers are predictably outraged that the thing they caused is happening.