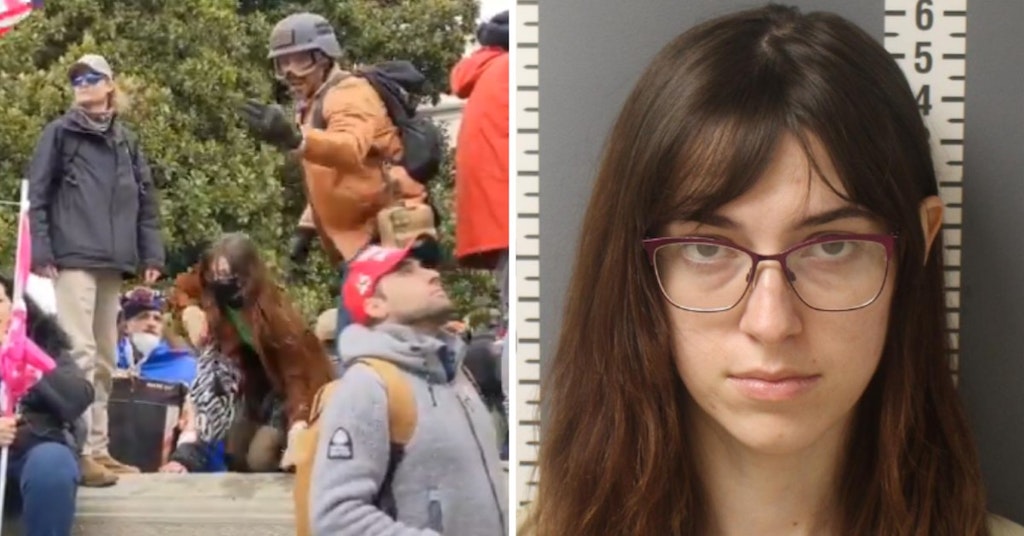 
A woman accused of being the one who stole House Speaker Nancy Pelosi’s laptop during the Capitol riot and attempted coup on January 6 has been arrested and hit with trespassing and violent entry charges. She has not been charged with anything related to theft as authorities are still looking into the accusations that she stole the missing laptop, which came from a former partner who says they saw her take it in a video.

An affidavit filed on Sunday and obtained by the press states that the ex-partner not only witnessed the theft, but knew that 22-year-old Riley Williams planned to give it to a friend in Russia. That friend then planned to sell it to a Russian intelligence agency.

The witness, who reportedly contacted the FBI several times to turn in their ex, describes seeing footage of Williams "taking a laptop computer or hard drive from Speaker Pelosi’s office."

"[Witness 1] stated that Williams intended to send the computer device to a friend in Russia, who then planned to sell the device to SVR, Russia’s foreign intelligence service," the affidavit reads.

However, the sale plan apparently "fell through" and the witness says that Williams either still has it or has destroyed it.

Williams' name was put on blast by the FBI after they put out an alert asking the community for help in locating her on Monday. They are currently investigating the theft and Russia plot investigations but have not yet announced any charges related to stealing or treason.

Pelosi's Chief of Staff Drew Hammill confirmed two days after the insurrection that her laptop had been stolen but said it was "only used for presentations," which may indicate that there was no sensitive information on the device. Maybe that's why the sale fell through?

According to NPR, Williams can also be seen in footage obtained by a London-based news crew and published in a documentary on the Capitol insurrection. In one scene, a young woman in glasses can be seen and heard yelling at people to go "upstairs, upstairs, upstairs," where Pelosi's office happened to be.

An independent U.S. journalist later captured footage of the same young woman "fleeing the #CapitolRiot" with a bag that looks like it certainly could contain a laptop.

Williams' mother Wendy confirmed that the woman in the footage is her daughter, according to the New York Post, but tried to claim that it wasn't her who was directing the rioters up the stairs.