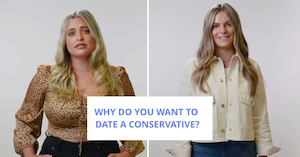 Apparently, Donald Trump’s ex-press secretary Kayleigh McEnany’s sister Ryann created a conservative dating app that is being funded by billionaire Peter Thiel. And it is a sight to behold. The app, which is brand new, is already being mocked on Twitter for its totally bizarre profile prompts, among other things.

The site, which is called The Right Stuff, is an invite-only platform that’s supposed to help “young conservatives” find “people that see the world the right way.” Ryann decided that other dating apps had “gone woke” and, well, conservative men and women were just not able to connect with each other at traditional conservative social events like the January 6th riot. (I kid, I kid! But also, I am serious.)

After it was revealed that the app asked users to share their thoughts on that particularly infamous day, social media users went to town.

“January 6th was…” read one of the prompts, referring to the day a group of former President Trump’s supporters stormed the Capital building on January 6.

Another question to help you find your soulmate? “Favorite liberal lie…”

Cue the jokes. What should really have been included in the app? And what should the answers be? People got creative.

In addition, a promotional video has also drawn attention for its weird message. It shows a series of young, conservative women (actresses? hostages? interns?) sharing things they are looking for in men they want to date.

“Someone who wants to have kids,” said one of the ladies, while another answered, “Someone who loves his family.” One woman said that she was looking for a man with an “alpha male vibe.”

Umm, good luck out there conservatives looking for love?