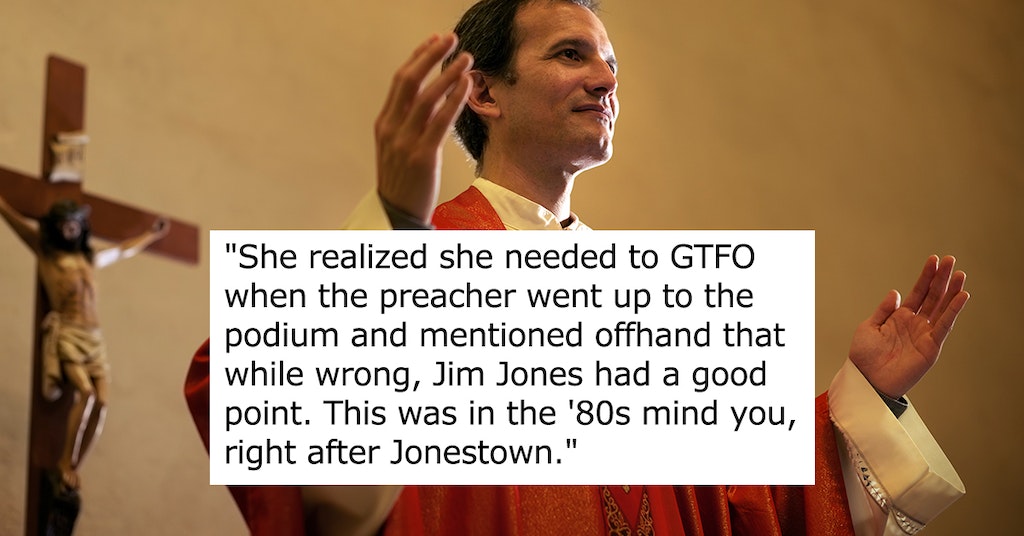 While not every cult ends in mass suicide like Jonestown or Heaven’s Gate, it’s pretty safe to say that cult life is overwhelmingly toxic. Some people find their way into cults because they’re searching for something or because they need guidance—and then find out later that they need to get out because wow, things are getting weird and kind of dangerous. Some are born into a cult and are raised in its rules, not realizing until they’re older that something is not quite right.

To leave a cult is an act of bravery, and over on Reddit, people are getting real about the moment they decided that cult life was not for them and they needed to escape. These stories are intense but hopeful, showing us that cults aren’t always more powerful than the human desire for freedom.

“My cousin and I talking on the phone when we were 16 and he had just gotten diagnosed with cancer. We were Jehovah’s Witnesses and they don’t allow blood transfusions. To live, Trent was going to need blood transfusions. I can still hear him saying, ‘I don’t want to piss off Jehovah but I don’t want to die. I’m just a kid!’ And all at once I went from being a good little JW kid to only doing what I absolutely had to because I still lived with my parents.” — rhett342

“Went to a church that had a night where a faith healer came to visit. He ‘healed’ a teenager of very severe asthma. As a sign of his faith, the teenager goes out on the bike trails without his inhaler the next day and almost dies. The pastor visits the family in the hospital and tells the heartbroken parents it was because they didn’t have enough faith. And with that, I exit stage right. I say that because that’s when I realized the whole thing was an effing show.” — VioletAnne48

“Not me, my mother. She used to go to a church/college up in New Jersey. Not gonna name any names here, but a cult none the less. No music, aside from Christian radio, STRICT dress codes, etc. She knew they were bad, but she realized she needed to GTFO when the preacher went up to the podium and mentioned offhand that while wrong, Jim Jones had a good point. This was in the ’80s mind you, right after Jonestown.” — ChrissyLov

“Two instances stick out to me, although I was just a child. My family was very involved and we didn’t get out until I was a teenager. My mom is still a member.”

“My first time sitting in a crowded room while the elders or leaders of the group publicly announced someone being “disfellowshipped” or ex-communicated. Meaning they did something wrong and nobody was allowed to speak to them until they were reinstated. I just remember feeling so sick for them. They were publicly shamed and humiliated, and their family was also treated poorly usually. Everyone knew about their perceived wrongdoings. Even as a little kid it just seemed so wrong to me. Shouldn’t we have been extra supportive and loving to people when they were struggling with bad choices? Shouldn’t we be encouraging? It felt so gross and cruel. I knew then something was wrong but I was only about 5 years old and if you questioned anything it meant satan was putting lies into your head so I always just kept my mouth shut. If you tried to get out you’d be shunned too and lose everyone you loved.”

“When I was 8 years old, struggling with my parents divorce and my dad’s subsequent exit from the ‘congregation,’ and an older family member sat me down and told me that if I wanted to have a dad I needed to convince him to start going back to ‘meetings’ and being a good member of the congregation otherwise he would die at Armageddon and I’d never see him again. What a fucked up thing to tell a child.” — moondust63

“I am a Former Jehovahs Witness. It was a a lot of things, but a big one was that I never felt like I could do enough, it was constant, never ending guilt. I used to think there was a problem with me, but I finally realized that no matter how much I did I would still feel like I wasn’t doing enough and that this wasn’t an accident, they wanted you to feel guilty and inadequate. I reached a breaking point and knew I had to get out for my own well being. Now I know more about cults and realize that this is a cornerstone of cult manipulation.” — WildRose1224

“I was in what you could consider a cult as a child. What finally fully woke me up was the pastor’s trial and conviction of multiple cases of sexual harassment and assault. We, the congregation, were told we needed to ‘lift [pastor] up,’ because this was a test from God and he needed our prayer. Everything finally clicked for me. All the terrible things this ‘church’ had been up to came crashing down and I realized my faith in this place was broken.” —not-a-virus-exe

“I happen to have an exact moment. Let me start with it was not a confirmed cult, however I was listening to ‘Beautiful Anonymous’ hosted by Chris Gethard. And a person on his podcast was a cult survivor. The more she talked the more scared I got. I was going to a meet-up with some other members. I threw two of them in my car and made them listen. We all quickly figured out what I had realized. We decided to stick it out, we had a trip at the end of summer, during the trip we made sure we were all in the same car, and we never came back. Without listening to that podcast I would have never in my life thought it was possible to be in a cult (or more in my case a cult-like environment) but you can.” — capt_petes

“When they changed their name. I had been sketched out for a while, but they made me alienate myself from all my friends outside the cult. So I stayed because I was worried I wouldn’t have anyone. One day the pastor announced that they were changing their name and ‘going their own way.’ The other church they were partnered with dropped them because their views were getting too out there. A cult church got dropped from a bigger cult church because their views were too crazy. Sitting there that night I decided I had to go. It sucked losing so many friends but now I’m in school and have a job I enjoy, had I stayed with them I’d be married to whatever guy there was closest to my age and pregnant with my third child.” — dariankay

“Former Mormon, and when I was about 13 and couldn’t get any satisfying explanation as to why women couldn’t hold the priesthood- ie. Have any position in the church above a Sunday school teacher. Everything we learned and did revolved around becoming a good housewife.” — Stitchymallows

“I don’t love talking about it, because I’m embarrassed I ever fell for it, but I was briefly involved in an MLM [multi-level marketing scheme] about 11 years ago, that in ways I view as a cult now. I’m talking meetings all the time, peer pressure to give up info on your friends so they can be pestered to join. These people’s whole friend groups revolved around the MLM.”

“So we went to a big weekend conference and on Sunday morning they had church services for each religion that went on simultaneously before the last day of ‘business training.’ I’m not a religious guy so I asked my group to just get me after church, and they agreed. So Sunday morning, someone comes to grab me from the hotel room and we head over. Low and behold it’s church (the Christian service) and they’re like ‘surprise! We thought you could use the good word! And I was PISSED.”

“But the real deal-breaker is what the ‘leader’ of our MLM said, which I’ll never forget. ‘We have business partners currently worshiping in our Jewish, Muslim, and Buddhist services. And we love them and support them…even though we know they’ll be in hell, because they can’t join us in the kingdom of heaven.'” — ramblingsbyalan

“For me, the item that finally broke my ‘shelf’ was waking up to the reality of how toxic the Mormon church’s teachings on sexuality and ‘sexual purity’ were in my life. I can literally attribute a decade of my life of experiencing severe mental health issues directly to the intense guilt and shame the church encouraged me to have. I think that until the cult affects your life in a personal, undeniable way, it is extremely hard, if not impossible for believing members to accept or even acknowledge any form of logical argument/evidence that their organization is bullshit. Only until I woke up to how the Mormon church had such a negative impact on my life was I even open to accepting the mountain of evidence that the church was a sham.” — mitch-plz

“I was in Amway/LTD for a year and a half. I realized I needed to get out when I found out about the killings of gays in Chechnya and began to suspect that I was unwittingly funding that or similar activities through my involvement in Amway due to the extreme conservatism of the environment. (Out of curiosity, I later found out that one of the DeVos foundations donated to NOM which worked toward enacting severe legal punishments for homosexuality in Uganda.)” — GWCooke25

“When I divorced my abusive ex and realized that I wasn’t free to have ANY more relationships after that if I waned maintain my relationships my family and entire social system – friends, acquaintances, everyone I knew. All because that cult masquerading as a religion controlled practically every part of my life. You’re not allowed to remarry, date or even flirt. Completely humiliating.” — JDub_Scrub

“I was raised in a Christian church that was borderline cult status. No music. No movies. We were told never to get close to anyone who wasn’t from the church. Using a condom is a sin. And it isn’t uncommon for 16 and 17 year olds to get married before they graduate high school. And I knew I had to leave when during the sermon the preacher told the congregation that it was a sin to think too much about what they told us. Most of my family still goes to that church so I’m kind of an outcast. People outside the church don’t care to know me because I’m so much different mentally and people from the church barely will look at me because I left it.” — buddyboiiiiiii

“I was about 12 and my parents weren’t coming to gatherings anymore but I really enjoyed it. Anyway I was supposed to ‘confirm my faith’ (be baptized) soon and the Paster sits me down and tells me I should consider relocating to my aunties house and stop seeing my parents at all cause they don’t keep faith. My parents are not fucked up at all. They are beautiful people that do right, pay taxes, work and love their children no matter what. They’re not alcoholics, drug users or abusers, but apparently because they don’t keep faith, I need to expel them from my life. That’s when I had the thought ‘what a fucked up thing to say to a child’ and never went back. I found out later they had been planning this for months to try to keep me in the congregation.” — bammilo