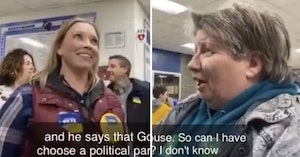 Pete Buttigieg, the first openly gay presidential candidate in the history of the U.S., is currently leading in the Iowa caucus that should have been wrapped up two days ago, with 26.8 percent of the vote at 71 percent reporting. Somehow, the South Bend mayor may have gotten at least a slight boost by a surprising bit of electoral ignorance.

#PeteButtigieg precinct captain in rural Iowa responds to a caucus-goer flipping out upon learning that he has a same-sex partner. It’s a masterclass in patience, persistence, and love. Bravo @nikkiheever #IowaCaucuses #cresco #howardcountyiowa pic.twitter.com/PhX7vRFh8X

“Are you saying that he has a same-sex partner, Pete?” the woman asks at the beginning of the video. When others around her confirm, she is shocked. “Are you kidding? Then I don’t want anybody like that in the White House. So can I have my card back?”

The volunteer precinct captain, identifies as Nikki Heever, reluctantly agreed to find out if that was possible, but also gave her own Christian point of view, which was basically “who even cares if he married a dude?”

“The whole point of it though, he’s a human being, right, just like you and me, and it shouldn’t really matter,” says Heever. “Well he’d better read the Bible,” says the former Buttigieg supporter.

The precinct captain’s face when she replies “he does” is perfect.

The homophobic woman tries to claim that the Bible says “a man should marry a woman,” and Heever reaches into the very depths of her soul and manages to find some patience.

“I totally respect your viewpoint on this, I so totally do, but I think that we were not around when the Bible was written.”

Indeed, many Biblical scholars have deemed the scant passages in the Bible that seem to address same-sex partners as mistranslations, or as being entirely irrelevant to today’s concept of homosexuality. Then again, how could we expect this woman to know about that when she didn’t know that Mayor Pete is gay?

“How come this has never been brought out before?” she demands. “It’s common knowledge,” Heever correctly replies.

It quickly becomes clear that this ignorant woman is not going to be swayed, but Heever says her piece anyway, showing a level of compassion and patience than many have praised.

“I just ask you to look inside your heart, because you sound like a Christian woman to me and I’m a Christian woman and my God wants me to love everybody,” she explains. The homophobic voter then questions Heever’s faith.

“You must not believe it then if you think it’s okay for somebody to be married to a same-sex person,” she says.

“No, I think we’re just interpreting it differently and that’s okay because everybody gets to have their own beliefs. But what I teach my son is that love is love and we’re all human beings.”

It’s pretty clear whose beliefs and general attitudes are more Jesus-like. A lot of commenters do not share Heever’s patience with the former Buttigieg supporter.

I’m fed up with bigotry. What you were taught as a kid shouldn’t infringe on the humanity, dignity and freedoms of others. Just leave people alone. I’m not a big fan of #PeteButtigieg politically, but I really wish he was standing there when that took place.
1/

Is she living under a rock? He has never hidden his sexual preference. She obviously doesn’t know anything about him so by all means vote for trump. His views are more aligned with hers.

It makes me so sad that these Stone Age beliefs are still around. But I’m more sad for her that she’s not prepared to learn or open her heart. She’s the one who’ll lose out.

“How come this has never come out before?’
How did you even manage to avoid knowing this?

Lady you need a dose of the 21st century. Does this lady have a TV or is she listening to a transistor radio still?

Others are impressed and grateful to Heever for how she handled the situation.

This woman is a star. A role model.

“What I teach my son (putting hand on his shoulder) is love is love and we’re all human beings.”

I love that she mentioned how she’s teaching her son to be full of love and understanding and to know LGBTQ or straight, love is love – we need more of her in the world. pic.twitter.com/nqBmOvbZIC

Beautifully handled by the precinct captain.

Thank you so much. As a gay person, I have to deal with this far too often