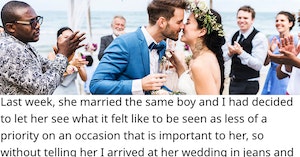 Weddings are meant to be happy occasions, but sometimes folks just have to spoil the fun. This mother took petty revenge against her daughter on her wedding day and then asked Reddit if she was TA for her actions.

“My (52F) daughter (24F) has always been a sloppy dresser,” u/BallFinal2037 wrote. “She has never dressed up well when we go to nice restaurants or family parties, and only wore dresses or nicer coats instead of her usual outfit consisting of hoodies and jeans when we asked her several times. I have always found her constant failure to dress nicely for us selfish, yet she refuses to see it as we do and does not see the issue with her behavior.”

The mother went on, “When she was 17, we had gone to a restaurant for my birthday and she had worn jeans, a T-shirt and a long jacket that she had only worn when she was asked to. The next day, she dressed up in a skirt and sweater and overall, a much nicer and more appropriate outfit to see her boyfriend without being asked to, and I was upset that she’d extend this courtesy to her boyfriend but not me. I had told her off for it before she left but she was confused and did not see how selfish she had been.”

The mother and daughter clearly don’t see eye to eye on the matter, as she added, “Last week, she married the same boy and I had decided to let her see what it felt like to be seen as less of a priority on an occasion that is important to her, so without telling her I arrived at her wedding in jeans and a blouse instead of my prepared outfit. However, at the wedding I was shocked to see that my daughter did not seem to take issue with this. She did not comment on my attire once throughout the day and has still been in the same level of contact with me yet has not mentioned or seemed to have cared.”

While her daughter didn’t care, her husband certainly did. “My husband, however, is angry at me, as he had tried to discourage me from swapping my outfit to a casual one and now is telling me that I had embarrassed him with my attire and that as mother of the bride I should have been more considerate of how it made him look to stand next to me. I, however, thought he had agreed with me that our daughter’s behavior was selfish and that this is nothing compared to the years of her refusing to put in the effort to dress nicely for us.”

People in the comments told the mother that when you play petty games you win petty prizes, and she was in the wrong for holding this grudge against her daughter.