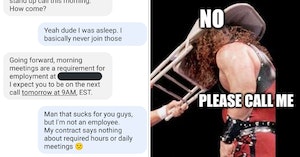 A text conversation that has almost certainly already made its way over to Reddit’s “Antiwork” forum was posted to Twitter after someone made the mistake of trying to boss around an independent contractor like they were a company employee and found that it backfired hard.

Independent contractors are self-employed, hired by clients in mutual business deals governed by the terms of a contract. As Dr. Horace Hungryman (likely not his real name but we’re using it anyway) points out, this arrangement has its upsides and downsides, but one of the best parts about it is the fact that you’re not subject to certain company rules and expectations as an employee would be. For example, if it’s not part of the contract, there is no reason you should have to attend company meetings.

Furthermore, if someone tries to act like you’re their boss and not their client, you can wave that contract in their face and remind them that there are plenty of other potential clients out there looking for help who don’t care if you’re at the morning meetings or not.

“Hi Caleb, I was just informed you weren’t on the morning stand up call this morning,” the first text reads. “How come?”

“Yeah dude I was asleep,” replies Caleb/Horace. “I basically never join those.”

“Going forward, morning meetings are a requirement for employment at [redacted],” says the texter later described as a “middle management nerd.” “I expect you to be on the next call tomorrow at 9AM, EST.”

This did not sit well with OP, who had to remind the manager exactly what his employment status was, and enjoyed every moment of it.

“Man that sucks for you guys, but I’m not an employee,” he wrote. “My contact says nothing about required hours or daily meetings.”

This, of course, rubbed right up against the ego of the middle manager, who managed to turn themself into a caricature of a petty boss.

“You REALLY need an attitude adjustment! If you aren’t on the next call, you’re fired. Your choice.”

In business terms, this is what we call a “mistake.”

“You can fire me if you want but you guys have to pay me through the 18th of next month regardless so I’m definitely sleeping in tomorrow. Enjoy your meeting,” said Hungryman.

“You guys really ought to read the contracts you have us sign sometime. Pretty wild stuff in there.”

In classic form, the manager attempted to backpedal from this horrendous error by asking Mr. Hungryman to call them. The reply to this request is everyone’s favorite part.

Really, people can’t get enough of it. It’s basically becoming its own meme.