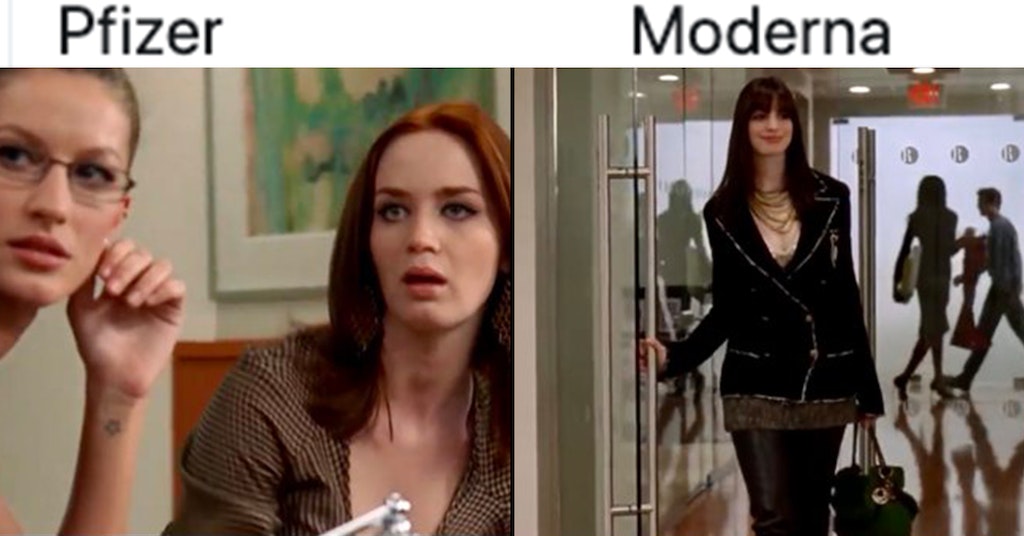 
What started out as good news about a coronavirus vaccine on the horizon has turned into two big companies appearing to try to one-up each other — and those companies, Pfizer and Moderna, are getting meme’d.

On Nov. 9, Pfizer announced its coronavirus vaccine was 90 percent effective in early clinical trials and could be ready for use by the end of 2020. A week later, Moderna announced that its vaccine, utilizing similar mRNA technology, was 94.5 percent effective in clinical trials. Two days later, Pfizer followed up by essentially saying (based on new data), "Wait, did we say 90 percent? We meant 95 percent."

That, of course, has led to some Pfizer vs. Moderna memes, starting with an imagining of them as dueling drag queens on a RuPaul-hosted reality show:

There was also a tie-in to important recent political events — namely, the confusion between Four Seasons Hotel and Four Seasons Total Landscaping.

As well as a bearded edition.

And collision courses with some other memes you might have seen.

Ultimately, it's good news that we'll have two highly effective vaccines to choose from provided all goes well with the remaining steps they'll need to go through to get approval and distribution. Though, as this nod to The Simpsons reminds us, it might not be an easy choice.