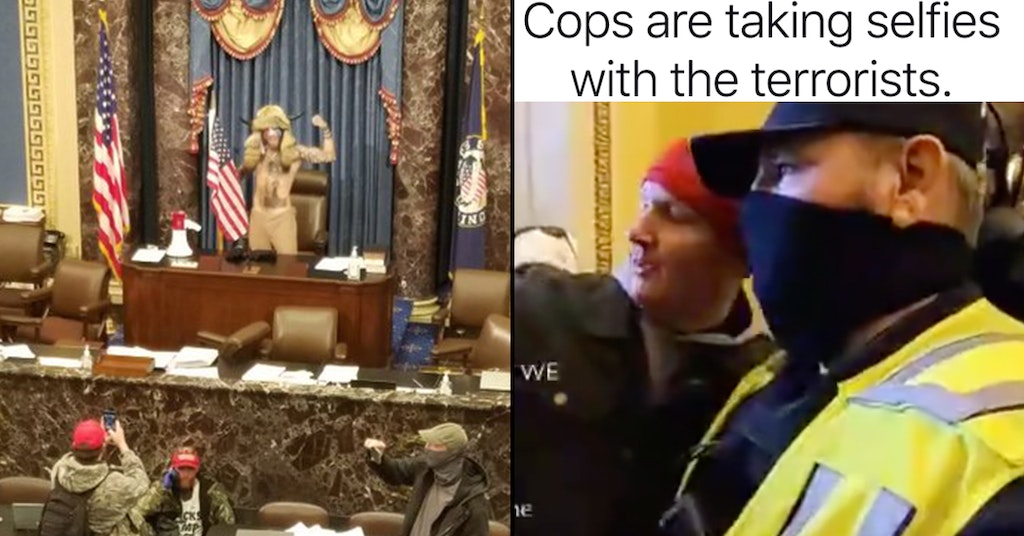 
It seems as though the last four years have come to a head at the U.S. as Trump supporters, egged on by the president’s conspiracy theories over the 2020 election, have stormed the Capitol building. At least one person was shot, reportedly in the neck, and congress and staff was evacuated as right-wingers broke through police lines, through doors, and into the House and Senate chambers.

Photos and video footage of the scenes soon flooded Twitter as much of the U.S. population watched in complete shock at this unprecedented event. Trump supporters, Proud Boys, and others were seen wandering through the building, breaking into offices and taking selfies at lawmaker desks, and pawing through papers on chamber floors as members of congress huddled on the floor.

Photos of Capitol police pointing guns at chamber doors as someone reportedly attempted to shoot into the room, videos of people in MAGA hats and with Confederate flags marching up the stairs and getting into the scaffolding outside the building, and blown minds abound. There is no possible way to overstate just how many absolutely bonkers images are coming out of D.C. right now.

We've done our best to gather a collection of the craziest of the crazy, but by the time we hit "publish" there will probably be hundreds more.