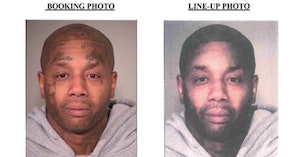 Well, here’s a horrendous story that illustrates why no one has any faith in the justice system. While many police officers are corrupt, racially biased, and poorly trained to deescalate dangerous situations, these cops from the Portland police department really went above and beyond when they essentially framed a man named Tyrone Lamont Allen. Allen was arrested and charged with bank robbery after a few tellers pointed at his photo as they went through pictures of potential suspects.

But police had altered Allen’s mugshot. None of the witnesses to the robbery said the robber had facial tattoos, but Allen has several highly visible ones across his cheeks and forehead. The department erased his tattoos, Oregon Live reports.

This also had the effect of substantially lightening his complexion. They then put the altered mugshot in a photo array. The tellers picked out Mr. Allen. He was arrested and charged.

A court is now deciding whether what the police did is constitutional.

The case is of interest for a lot of reasons, not just because it sounds like a hideous way to set someone up. The use of Photoshop in mugshot photos presented to witnesses has been on the rise. A judge will soon decide on the legality of the practice because of what happened to Allen, and that might have a ripple effect on future police procedures in Oregon.

Lawyers for the department argue that subtle changes are sometimes made to photos to keep a suspect from standing up in a photo line up. Being notable might cause a witness to pick a suspect incorrectly. Allen’s tattoos certainly made him stand out, but in this instance it would have had him disqualified. The robber had no tattoos! That can’t be said enough times.

Police forensic criminalist Mark Weber was responsible for applying the digital make up, and he has worked on other cases where his skills were used to subtly alter things about a person’s face. But the alterations weren’t properly documented, which runs against federal guidelines for the use of Photoshop.

It’s a pretty dangerous practice. Witnesses and the juries who hear their testimony believe that the photo they saw was real, and therefore their identification was accurate. Imagine how their perception would change if police told them the image they were looking at was changed by Photoshop.

People discussing the case online have mentioned that the purpose of many of these types of cases isn’t necessarily to have someone convicted in court. Much more often, innocent people take plea deals, because they can’t afford to take the risk of a criminal case. It’s both an enormous financial and psychological burden:

Who said anything about trial? The point of most of these cases is pressuring the made-up culprit into taking a plea deal, and many do.

And quite a few people pointed out that Allen looks nothing like the circulated photo of the man robbing banks, with or without Photoshop:

He doesn’t resemble the robber before or after the tattoos. I am questioning the tellers as much as the police. pic.twitter.com/VonDXDkYMj

Letting digital manipulation stand as submittable evidence is a very slippery slope, and the Portland police are happy to slide right down it.