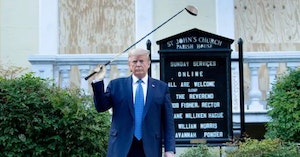 Absolutely no one other than people trying to suck up to Donald Trump out of lust for power was impressed by his photo op in front of the St. John’s Episcopal Church in which he awkwardly held up a Bible after protesters in the area were tear-gassed and chased out of the area. In fact, many religious leaders were outraged that peaceful protesters were assaulted just so that he could be filmed walking over there and have his picture taken while holding a Bible.

Lawmakers and religious leaders voice outrage at President Trump after police used tear gas and flash bangs against peaceful protesters outside the White House to clear the crowd for Trump to do a photo-op at St. John's church. https://t.co/xFjdz6b3CH

On the other hand, Trump holding up a blank Bible like that created a perfect Photoshop opportunity, and people have jumped on it with gusto, especially after The Poke pointed out that he was “basically begging to be photoshopped” with that stunt. The sign in the background also helps.

Donald Trump is basically begging to be photoshopped after he stood outside this church with a bible. Send us yours and we’ll round up the funniest! #pokechallenge pic.twitter.com/NRuHLBcKj6

Dozens of people joined in on the fun, and the results are exactly the kind of laugh we all need after more than a week of protests and police responding to demands to end police brutality with police brutality. Here are our favorite examples:

Not mine, but great all the same. pic.twitter.com/XZjrD6JwTb

Was expecting someone to do this already but can’t see one #PokeChallenge pic.twitter.com/wGCQBuFaIu

This is what is says in Trump’s Bible #Pokechallenge pic.twitter.com/MTg0Xt3rcH