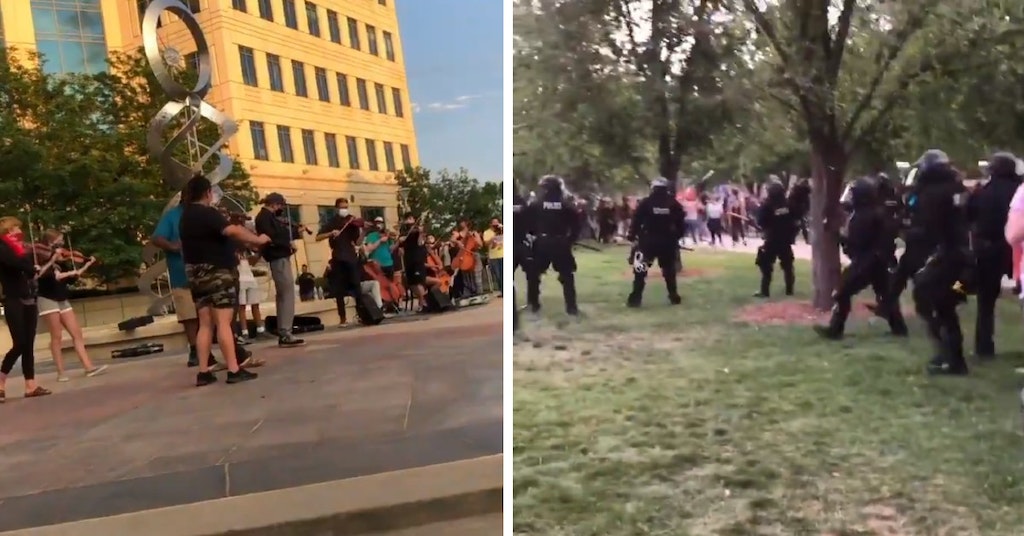 Disturbing video showing a battalion of police surrounding and attacking a crowd of people holding a “violin vigil” for Elijah McClain, a young Black man killed by police in Aurora, Colorado, has gone viral as people widely ask why such an assault on violin players was necessary. McClain himself was a violinist and often played for animals waiting for homes in shelters.

Yesterday Aurora, Colorado was holding a violin vigil for Elijah McClain, who was known for playing his violin, especially to animals.

The young man died of cardiac arrest after he was violently detained by police and injected with ketamine, allegedly to sedate him, because he was “tensing up” upon contact. McClain suffered from chronic anemia, which often left him especially cold and is why he frequently wore a ski mask outside. Unfortunately, someone decided that a ski mask was evidence of criminal activity and called 911 on him.

Audio of McClain begging for his life, reminiscent of George Floyd‘s last words, shocked and angered residents of Colorado and much of the rest of the nation. Protesters in Aurora were gathered in a local park, sitting on the grass and listening to violinists play in McClain’s honor after hours of marching, when police suddenly announced that it was an “illegal gathering” and moved in.

The woman taking the video can be heard pleading “no” over and over again in horror as police in riot gear file in and sweep toward the violinists while others shout at them that there are children in the area. Additional footage shows police attacking the crowd with tear gas, pepper spray, and other less-lethal weapons as people yell “peace” and “this is a peaceful protest.”

The Aurora Police Department claims that protesters near the violin vigil had begun throwing rocks, bottles, and other small items, using this as an excuse for the attack. However, civilians on the ground refute this claim, and extensive protester footage of the evening appears to show multiple examples of the police instigating violence on people sitting on the ground, linking arms, and performing other non-violent resistance actions.

After 4.5 hours of peacefully protesting, the Aurora PD claimed that “protestors were seen with rocks”, giving them “reason” to attack the people. As the police walked over the barricade, all of us protestors linked arms, and walked backwards… here’s what follows pic.twitter.com/D9uGrzBsnn

I have 21+ minutes of footage. Proof of violence incited by aurora pd pic.twitter.com/p1WIENWGOu

In the midst of the chaos, one Black violinist got up with his electric violin and started playing beautiful versions of popular songs. Some are crediting him with defusing a situation made violent by the police, but either way, it’s an incredible sight.

As Aurora Police in riot gear sweep the protest from the municipal park, this dude fires up his electric violin and literally stopped the police. Cops 10 feet away. Started with Bruce Hornsby “The way it is” then into this masterpiece!#Auroraprotest #ElijahMclain pic.twitter.com/2t4JRqiqWh

In spite of this, the violence of the Aurora police on Saturday has drawn widespread condemnation from people fed up with how police brutality seems to be the answer to every protest against police brutality.

Cops killed a violinist, so ppl held a violin vigil, and the cops attacked it. Dont have to be Vladimir fucking Ulianov to see how messed up this is. The liberal veneer of American plutocracy is slipping, the state is losing legitimacy, and its storm troopers dont know what to do https://t.co/8FYv4AOOtW

Snipers on Elijah’s mother while she spoke. Riot gear to dismantle a violin vigil with children in a park. Tear gas & pepper spray on children barely in their teens. How can you look away?

THIS IS WHY WE SAY DEFUND/ABOLISH THE POLICE. This was a violin vigil—a peaceful musical vigil—for Elijah McClain and the Aurora PD came in like stormtroopers to break up and tear gas the crowd. End this shit now. https://t.co/Zr2Q3zZoju

Aurora Police are terrorists who tear gassed children and other protesters as they mourned the murder of Elijah McClain yesterday.

Today they are trying to say they didn’t. They killed Elijah and they continue to terrorize the Aurora residents.

Could this be why people want to defund the police?