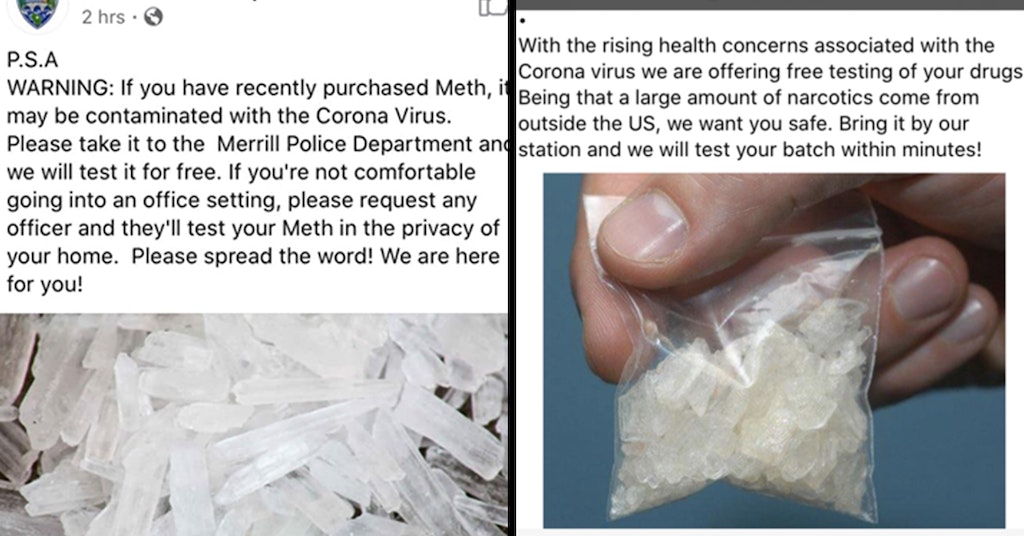 If you’re looking to the government to provide accurate and helpful information as the coronavirus spreads to the United States, you should probably stop.

As it turns out, at least two dozen police departments across the country have been purposely sharing blatantly false reports about meth potentially being infected with the virus—some, reportedly as a joke, and others, in an attempt to get people to turn over their drugs.

“If you have recently purchased Meth, it may be contaminated,” reads a post from the Merrill Police Department in Wisconsin on Facebook. “If you’re not comfortable going into an office setting, please request any officer and they’ll test your Meth in the privacy of your home.”

The absurdity of this may seem obvious to some, but in an era where fake news has become commonly shared as fact on social media, and in the middle of a health crisis that still isn’t fully understood, it’s conceivable that some people would, you know, believe information put out to the community by their local police departments.

After facing pushback from commenters, as well as scathing criticism from the media, many police departments that spread this misinformation have updated their posts.

“We are aware that our post has generated a lot of concerns and we want to clarify that there is   no indication illegal drugs can have Coronavirus in them… We apologize for any confusion our post may have caused.”

But these “clarifications” don’t necessarily come with any acknowledgement that spreading misinformation about coronavirus or trying to scare people into turning over drugs might not be a great idea.

In fact, the Merrill PD bent over backwards trying to explain away their decision to make the initial post linking coronavirus and meth.

“Just to give you some history, we have actually experienced people report their illegal drugs being stolen, being ripped off in a drug deal, being sold a look-a-like illegal substance, etc.,” they wrote in their update after being called out for fake news.

“So this attempt, although a long shot, still had some possibility behind it. We will take those easy grabs at removing poison from our community whenever we can. That is our role which we un-apologetically must fulfill.”

The decision to purposely spread false information about a worldwide health crisis in order to create fear is facing even more criticism considering how the Trump administration has handled things so far.

Not only has President Trump himself spread misinformation, but his Vice President and head of coronavirus response Mike Pence quickly moved to stop a leading expert on infectious diseases from speaking directly to the public, lest he accidentally contradict Trump with those pesky little things called facts.

It looks as though police departments may be putting a halt to their part in sharing this specific fake news, but as we all know, once something goes out on social media, no matter how easily it’s proven false, it can quickly spread. And if the cops were willing to lie about the coronavirus once to suit their own goals, who’s to say they won’t do it again when the opportunity arises?

After all, if we don’t hold the leader of the country responsible for spreading falsehoods, why should any other public servants tell the truth?