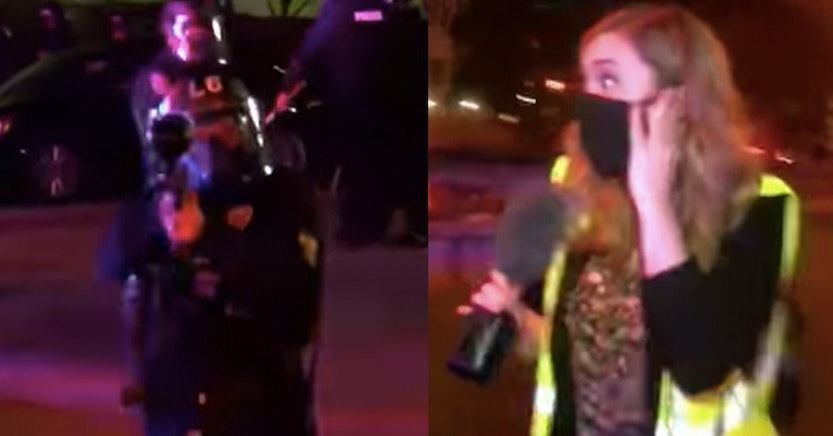 Reports of police escalating tensions and instigating violence at protests across the country have run rampant across social media, with video evidence repeatedly painting law enforcement officers in an excruciatingly negative light.

One of the things that sets the violence of these protests apart from others throughout American history is that there have been numerous reports of police attacking or arresting the media for simply doing their jobs — unprovoked, despite clear identification, and in some cases, it would seem, intentionally.

Kaitlin Rust was reporting live for Wave 3 from the protests in Louisville, Kentucky on Friday night when an officer opened fire on her and photojournalist James Dobson, spraying them with what Rust described as “pepper bullets.”

The two appeared to be far from a line of police officers when the incident occurred. Rust was off camera when the projectiles began pelting her, but can be heard shouting.

As the anchor asks her who they were aiming at, an officer with a gun aims it directly at the camera and begins firing more non-lethal rounds.

Louisville Metro Police Department spokeswoman Jessie Halladay appeared to try to chalk the whole thing up to an accident in a briefing the next morning, despite footage clearly showing the officer moving closer to the Wave 3 crew and taking aim before firing.

“We believe it was one of our SRT officers; we are still trying to identify which officer,” she said. “Targeting the media is not our intention. There was a lot going on last night, and to be fair to both the officer and to Kaitlin, we need to take a deeper look at what happened and what prompted that action.”

But it is only one of many scenarios over the past few days where law enforcement appear to have targeted journalists.

Fortunately, Rust and Dobson are fine, though not all members of the press caught up in police violence in these protests can say the same. And one important question keeps being asked: if this is what’s happening on camera, live on air, what are these cops doing when the cameras are finally off?