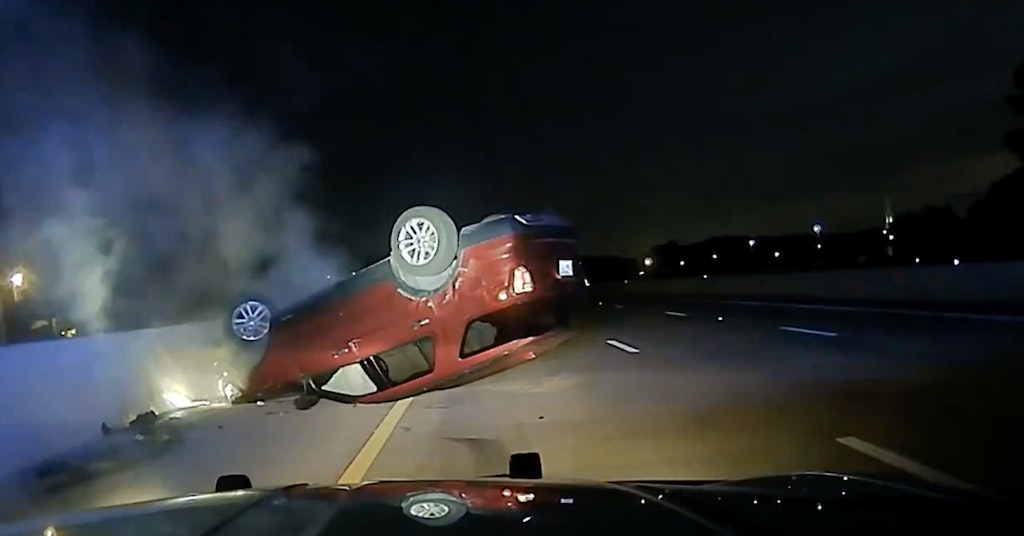 Police Flip Pregnant Woman’s Car, Accuse Her Of ‘Fleeing’ Despite Hazard Lights And Slowing Down

A truly shocking video showing a cop flipping a vehicle that he felt didn’t pull over fast enough has people condemning law enforcement and their tactics yet again.

Police dashcam footage from the July 2020 incident was made public after Nicole Harper filed a lawsuit against the Arkansas State Police for negligent and excessive force.

In it, Senior Cpl Rodney Dunn follows Harper’s vehicle closely on the interstate, sirens flashing, signaling for her to pull over. Harper pulls into the right lane, slows down, and first puts on her turn signal, and then her hazards. She would later claim she was looking for a place to turn off the interstate, as that stretch had a reduced shoulder and she didn’t think it was safe.

At no point in the video does Harper appear to speed up, even when Dunn races up to her, straddling two lanes, and enacts a PIT maneuver, forcing her off the road and ultimately flipping her car.

The full 50-minute video also shows the conversation Dunn and Harper had in the immediate aftermath of the crash, in which she tells him that she’s pregnant and he simply chastises her for failing to pull over.

In actuality, Arizona law requires drivers to do exactly that when they are in a place where it isn’t safe for them to pull over. But despite following the law, Harper was charged with fleeing from an officer.

“There was a less dangerous and more safe avenue that could have been taken before flipping her vehicle and making it bounce off a concrete barrier going 60 miles an hour,” Harper’s lawyer, Andrew Norwood, told Fox16.

A previous Fox16 investigation shows that Arkansas State Police used PIT maneuvers almost twice as much in 2020 as they did in 2019, and that they resulted in at least three deaths.

Harper says her goal with the lawsuit is to force police to reevaluate procedures, as she feels this escalation never should have happened.

“What made him think this was okay?” she wondered.

The Arkansas State Police, however, appear to be standing behind their officer’s choice, releasing a general statement putting the blame back on any “fleeing driver [who] could have chosen to end the pursuit” and painting the PIT maneuver as a way to save lives “among those who choose to obey the law against those who choose to run from police.”