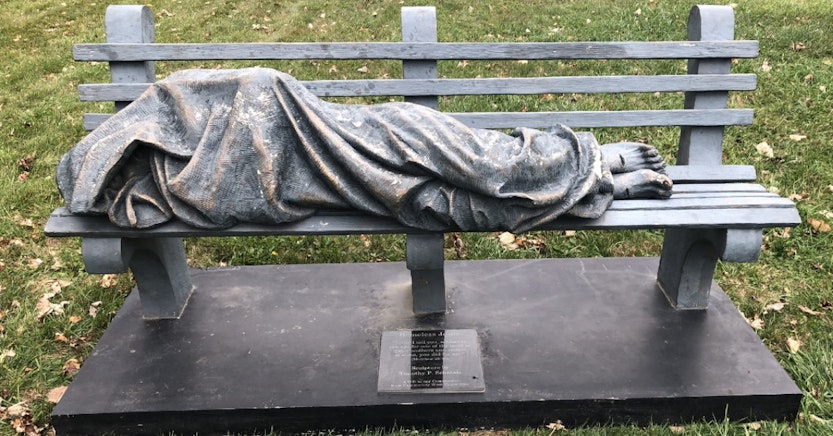 It took only 20 minutes for someone to call the police on the infamous “Homeless Jesus” statue that has been traveling the world since it first appeared at the University of Toronto. The statue depicts a man huddled under a blanket while lying under a bench and is meant to look like an everyday unhoused individual from a distance. However, the person under the blanket is actually Jesus Christ himself, as evidenced by the holes in his feet, meant to depict the wounds from his crucifixion.

The fact that people often call the cops on the statue is exactly the point of it, but the 20 minutes it took for someone to do so after it was installed in Cleveland, Ohio might be a new record.

According to St. Barnabas Bay Village Episcopal Church priest Alex Martin, it actually took less time than that for a police officer to show up because someone had made the call.

“Homeless Jesus” was created by Canadian sculptor Timothy Schmalz, who made it in order to “dignify and raise awareness of the homeless in the community.” Jesus himself was homeless during the more well-known parts of his life, having been born as his parents fled their homes as refugees and traveling with little but the clothes on his back when he started calling himself the son of God, according to the Bible.

This is not the first time that someone has called the cops on Homeless Jesus. According to VICE News, it’s happened several times before, sometimes out of concern that a real person needed medical help or to be protected from exposure, and sometimes for much less altruistic reasons.

“People call the cops on Jesus all the time, in many different ways,” said Schmalz. “Literally that’s happened quite a bit.”

The idea of the statue is in part to inspire (or possibly shame) people into helping the unhoused, but also to remind people that Jesus was a lot closer to homeless individuals than anyone with money or power.

This latest incident is also rubbing up against the current national movement against police brutality and has some using this as an example of why you should avoid calling the police on those who are minding their own business.