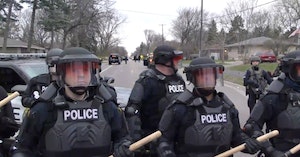 Another young Black man has been killed by police in a Minneapolis suburb after he was pulled over for having air fresheners hanging from his rearview mirror, which is apparently illegal in some places.

Daunte Wright, 20 and father of a one-year-old, died at the scene after a police officer shot him after making him exit his vehicle because he allegedly had an outstanding warrant.

Though dashboard and body camera footage has yet to be released, police claim that Wright started to get back into his car when the yet-unnamed cop shot and killed him. According to local reporter Tracy Maher, the Brooklyn Center chief of police says that the officer meant to draw her taser to subdue Wright but accidentally drew her sidearm instead.

Wright’s mother, Katie Wright, told reporters that her son called her as he was being pulled over to ask for the insurance information on the car, which she had just gifted to him two weeks prior. She then heard officers telling him to get out of the vehicle.

“He said, ‘Mom, they want to know about insurance.’ I said, ‘When the police officer comes back to the window, put them on the phone and I will give them the insurance information,'” Katie recalled. “Then I heard the police officer come to window and say, ‘Put the phone down and get out of the car’ and Daunte said, ‘Why?’ He said, ‘We’ll explain to you when you get out of the car.”

Reports suggest that Wright got back behind the wheel after he was shot and managed to drive for “several blocks” before crashing into another vehicle. His girlfriend was in the passenger seat at the time, with witnesses saying they saw a young woman exiting that side of the car “covered in blood.” She was taken to the hospital with minor injuries from the crash.

Before that, she was able to call Katie and tell him that her son had been shot. The grieving mother had to beg officers to remove her son’s body from the ground after he had been laying there for an extended period of time.

Protests erupted in Brooklyn Center and other parts of the U.S. as news of Wright’s death spread. The area is only a half-hour drive from the courthouse where Derek Chauvin is being tried for the murder of George Floyd — an event that resulted in mass protests across the nation for several months in 2020.

Some replaceable storefront glass was damaged while dozens of people were injured by “less-lethal” police munitions as they were choked with teargas for raging against a continuing pattern of cops killing Black people over pretty much nothing.

A handful of people were arrested according to Unicorn Riot, though most were released after receiving “unlawful assembly” citations after police declared a curfew in the area, knowing the protests were coming.

Police departments in Minneapolis and the surrounding areas have been been cited many times for incidents of police brutality, with several high-profile cases of their cops killing people including George Floyd, Jamar Clark, and Justine Damond. A 2013 report found hundreds of complaints against Minneapolis officers resulted in zero disciplinary actions, with over 200 being dismissed simply because they were over 270 days old.