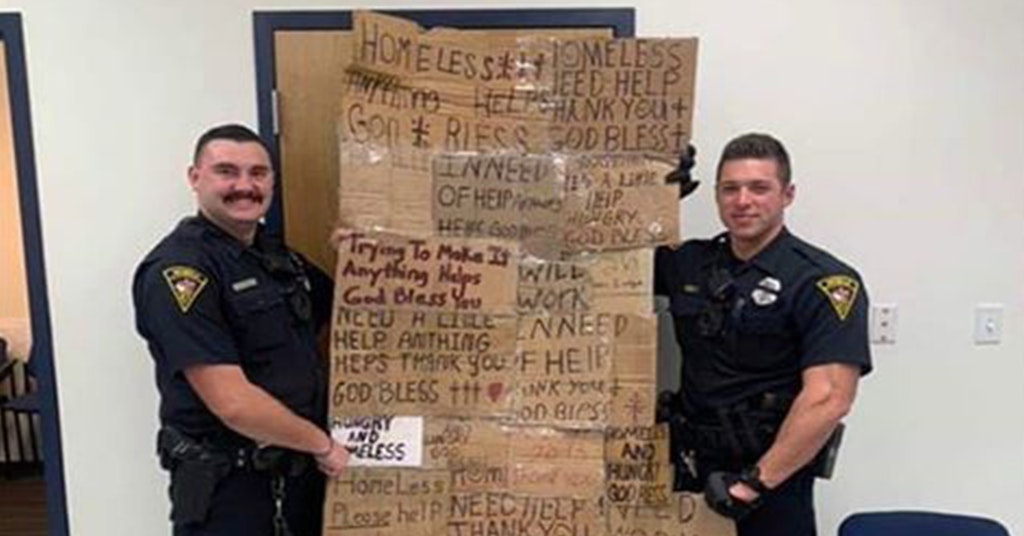 An Alabama police department is facing widespread criticism for a photo of two officers holding up a “quilt” made from taped-together signs confiscated from homeless individuals that was meant to be a gag gift for their supervisor. The chief of the Mobile, Alabama department has already apologized for what he called an “insensitive gesture.”

“As a police department entrusted with serving and protecting our community, we offer our sincerest apology for the insensitive gesture of a Facebook post by two of our officers where they are holding up a homeless ‘quilt,’ made of panhandling signs,” the statement by Chief Lawrence Battiste says. “Although we do not condone panhandling and must enforce the city ordinances that limit panhandling, it is never our intent or desire as a police department to make light of those who find themselves in a homeless state.”

As of this afternoon, the police department has not yet said whether the officers involved in the making of the quilt or the photo, originally posted on one of the cops’ personal Facebook page, will be punished.

The apology is not enough for many on social media, however, who feel that the “quilt” illustrates a pervasive attitude among police about homeless individuals who often have little to no choice other than to panhandle in order to survive.

Officers from @MobileALPolice made a "quilt" out of signs they apparently confiscated from homeless people as a gruesome gift for their precinct.

How you could even think of creating such a thing, let alone pose with it smiling like this, I have no idea. pic.twitter.com/0Rse8CzymT

“In this photo posted to FB, 2 officers from Mobile, AL, pose with a "quilt" made from cardboard signs confiscated from homeless people in the area over Christmas break.” pic.twitter.com/TIP3wR041q

Calling that a “homeless quilt” is a particularly sick characterization of property that was confiscated from people who have to sleep on cold sidewalks in winter, without even cardboard to cover them or serve as a ground cloth.

As homeless populations grow across the U.S., police have been criticized by human rights activists for their increased harassment of these vulnerable individuals via “sweeps” in which they throw away or steal the few possessions that they have for the crime of setting up tents because they have nowhere else to sleep. The taking away of these meager possessions, including their panhandling signs, only sets them further back in their efforts to get back on their feet—an incredibly difficult task for anyone in the U.S., where safety net programs are sorely lacking.

Afterward, homeless individuals simply have to move to another spot, make a new sign if they can, and start again from nothing.

The growing issue has people wonder whether a “panhandler patrol” is the best use of taxpayer money.

They wasted time stealing signs from homeless people, then wasted more time putting a “quilt” together, then even more time posting to social media. Meanwhile, kids across the country are addicted to opioids and POCs get murdered for being in the wrong place at the wrong time.

Either way, Jesus would not approve.