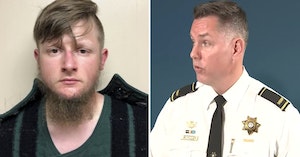 Many internet users are furious with Atlanta police captain Jay Baker after he said during a press conference that the mass shooter who targeted spas staffed by Asian women in his killing spree had a “really bad day.”

People of color in the U.S. have come to expect (though are still rightfully angry about) sympathetic coverage of a white mass murderer from the police and media, but this statement had the phrases “BAD DAY” and “FOR HIM” trending on Twitter today.

“He was pretty much fed up and kind of at the end of his rope and yesterday was a really bad day for him,” said Baker. “And this is what he did.”

Naturally, Asian Americans and their allies were not pleased to hear a police captain say that the man who murdered eight people, at least six of whom were Asian women, was the one who had the bad day. We all have bad days and the vast majority of us handle it without murder, but mostly the real “bad day” was had by the victims and their loved ones.

“Imagine losing your loved one to a senseless shooting, and the police captain says this about the shooter,” wrote morning news anchor Angela Chen.

Others have pointed out that this murderer can be added to the long list of white mass shooters who ended up safely in police custody while people of color disproportionately have their “bad days” ended by a cop’s bullet. Then, instead of news media jumping at the chance to interview their loved ones to find out what good, gentle Christians they were before their “bad day,” they get their name dragged through the mud.

Baker also mentioned that the shooter may have been struggling with sexual addiction, which can be a serious problem but has absolutely no connection with murder sprees targeting women of a specific race.

“He does claim that it was not racially motivated. He apparently has an issue, what he considers sex addiction and sees these locations as something that allows him to go to these places and it’s a temptation for him that he wanted to eliminate.”

Essentially, this man assumed that massage spas staffed mostly by women of East Asian descent were somewhere he could go for sex, but this was not “racially motivated” according to the aforementioned mass murderer.

It remains unclear when the U.S. will end its cycle of treating white mass shooters who likely committed a hate crime with kid gloves, even just days after a movement began to raise awareness about the spike in hate crimes against Asian individuals in the past year.