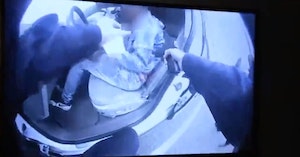 Body camera footage released by the Brooklyn Center Police Department appears to support their assertion that the officer who shot and killed Daunte Wright near Minneapolis confused her sidearm for her taser, labeling the shooting an “accidental discharge.”

The video shows Wright attempt to get back into the driver’s seat and struggle with officers after being informed that he’s being arrested for an outstanding warrant before the officer shouts “taser” multiple times only to find that she wasn’t holding her taser.

The video footage includes the graphic moment the officer shoots Wright and may be disturbing to some viewers.

Wright, likely in a panic, drives off after the officer shoots him, leaving her standing there. She can be heard saying “oh s–t” just after her gun goes off followed by “I just shot him.”

Wright reportedly made it several blocks down the road before crashing into another vehicle. The police claim they attempted to give him CPR when they caught up to him, but he died at the scene from the gunshot wound.

Brooklyn Center Police Chief Tim Gannon declined to identify the shooter, saying only that she is a “very senior officer,” and announced that she has been placed on administrative leave, as is standard any time an officer shoots someone. He told reporters that he believes she did mistake her pistol for her taser, though many have questioned how this could have happened since they’re supposed to be strapped to different sides of an officer’s body and feel quite different in the hand.

“It is my belief that the officer had the intention to employ their taser, but instead shot Mr. Wright with a single bullet,” said Gannon.

Brooklyn Center Mayor Mike Elliott has called for the unnamed officer to be fired for what in the best case scenario can only be described as gross incompetence.

“We cannot afford to make mistakes that lead to the loss of life of other people in our profession, and so I do fully support releasing the officer of her duties,” he said in a press conference.

The Brooklyn Center police are also being criticized for stopping a young Black man for hanging an air freshener from his windshield—a minor offense that is rarely enforced and that few people are even aware of. Police across the U.S. disproportionately target Black drivers for traffic stops, and these stops are much more likely to lead to violence and death than when cops stop white drivers.

Meanwhile, Fox News is being very Fox News in response to this latest police killing, with the local correspondent seeming to bemoan the fact that some people “default” to the “belief” that Black lives matter, and that many people think that Black folks are “somehow” treated as though their lives don’t matter.

“When you have something like an accidental discharge people aren’t going to say that it’s justified and they are still going to default to the belief that black lives matter, and they think that black people are treated somehow otherwise,” he said.

We’d like to say this is a new low for Fox News, but we can’t.