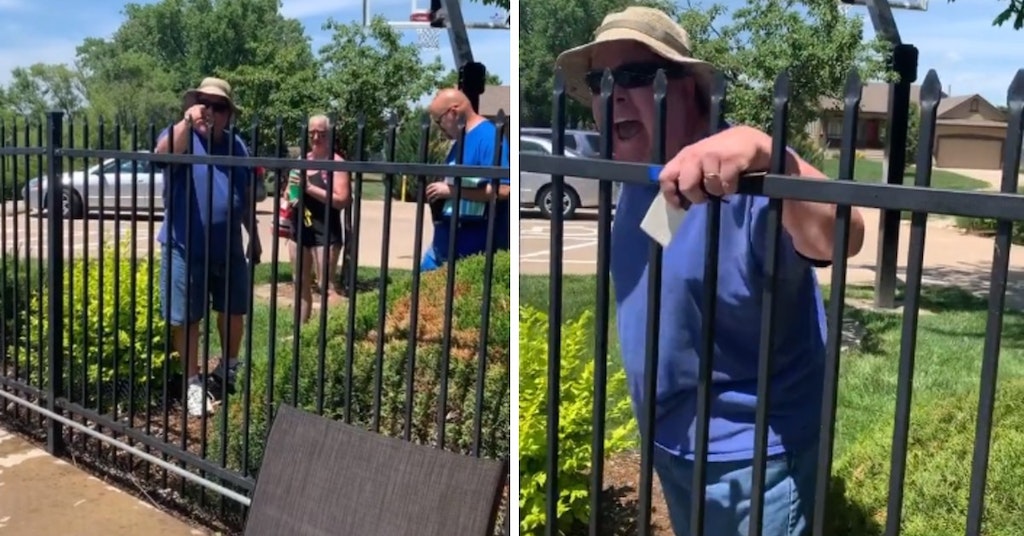 A man claiming to be the manager of a residential swimming pool is going viral on TikTok for screaming and cursing at two underage girls for allegedly breaking a rule saying they can’t bring a guest without adult supervision. The girls in multiple videos now circulating try to explain that the individual he’s claiming is a guest is actually staying with the local family and is therefore a resident herself, and also point out that he’s been seen breaking rules himself.

The man dubbed by many as “Kyle” (the male form of “Karen” to some) responds by screaming at them to “get out.”

“I’m getting real tired of your sh—t, and your sh—t,” he says, pointing at two teen girls including the one taking the video. “I’m tired of you people breaking the rules.”

One of the girls then points out that the rules say not to cuss in the pool area. They then proceed to point out all the other people in the area breaking rules, including some adults “drinking” (presumably alcohol) by the pool. The girl taking the video also accuses him of being at the pool with his family past the closing time of 10 pm multiple times. That’s when Kyle loses it and clinches his spot as an internet sensation.

“I manage this pool, and I keep things clean here and I fix things now GET OUT!” he says, screaming the last two words at the top of his lungs while aggressively jabbing his finger away from the pool area.

“I’ll wait for the police to come escort me out. I’m sorry,” says one of the girls. “Because I’d like to talk to them as well for the way that you’re treating me.”

At this defiant, pool manager Kyle stands silently for a bit, staring them down like he’s trying to intimidate them.

“You’re being a belligerent little child and I have asked you to leave,” he says.

“You’re being a harassing old man!” one of the girls counters. “You’re harassing me. For swimming at the pool.”

Kyle then accuses them of breaking the rules again, and we come full circle. He then accuses the girls of being “disrespectful” for daring to argue with him and tells them to turn the phone off, which they refuse.

In two shorter follow-up videos, other adult men can be seen taking pool manager Kyle’s side and having to calm him down because he can’t control himself while addressing two underage girls about an alleged minor pool rule violation. In the last video, one of the girls gets in an amazing slam that almost banishes Kyle like a magic spell.

Is it just us or did that look to hit Kyle pretty close to home?

In additional follow-ups recorded after the girls are safe at home, they explain that the police never showed up in spite of Kyle claiming he called them, and say that one of their moms will be speaking with this pool manager about his behavior.