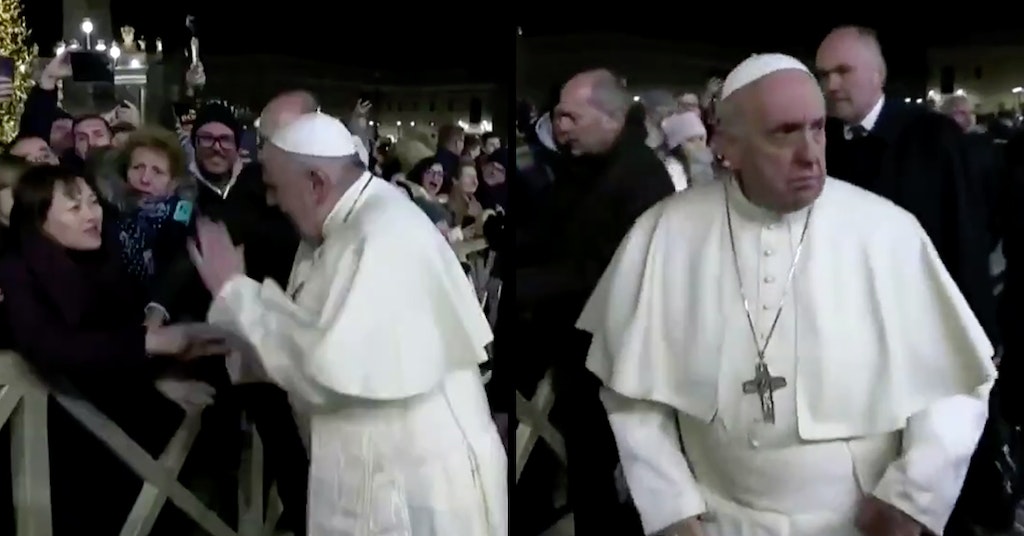 On Tuesday night, Pope Francis greeted pilgrims at the Vatican, circulating close to the nativity scene and wishing his visitors a Happy New Year’s Eve. One woman wasn’t satisfied with being close enough to the Pope to smell him. She wanted to touch. In a video clip that has gone viral, the woman can be seen grabbing the Pope’s hand and attempting to pull him closer to where she is standing behind the barricades.

He does not look happy about it and a moment later he slaps her grasp away:

Ooof..that's extra naughty when the Pope has to slap you. pic.twitter.com/OsMyZY5x3G

People were astounded to see the Pope strike someone in a moment of frustration, because the Pope is supposed to be God’s most holy messenger on Earth. While it does sometimes feel like God is giving us a smack, we’re not supposed to see the Pope literally do it. There were a lot of jokes and a lot of commentary, with everyone from atheists to religious conservatives weighing in:

Jesus: Turn the other cheek

Slapped by the Pope
And who’s to blame?
You give Popes
A bad name

Unsurprisingly, The Pope is a Sagittarius. Don’t test our patience…we don’t owe you anything. https://t.co/5L4KYnPdww

The Pope giving lessons for 2020. Be kind, be generous. But PROTECT YOUR BOUNDARIES!!! pic.twitter.com/j0Ek17X7iZ

Papalogist here. Grabbing Francis by the hand may seem like harmless fun but please remember that if you touch a pope his mother will reject him and abandon the nest.

Hey, atheist here for whatever that's worth. But someone as famous as the Pope has absolutely nothing to apologize for. His reaction was fairly tame, given that the woman could have literally been an assassin. If all she got was a slap on the hand, she got off extremely easy.

Pope Francis had a chance to repair some of the PR damage the very next day, as he presented his New Year message to followers at St. Peter’s Basilica, this time from behind a podium where no one could physically accost him. And, somewhat surprisingly for a representative of the Catholic Church, he actually apologized, saying, “We often lose patience. So do I.”

"We often lose patience. So do I."

Pope Francis apologized for slapping the hand of a woman who had yanked his arm pic.twitter.com/nB6iNQG4KO

He also denounced violence against women, according to CNN, saying that he was sorry that his behavior was an example of that abuse, if a mild one.

“Women are sources of life,” he said. “Yet they are continually insulted, beaten, raped, forced to prostitute themselves and to suppress the life they bear in the womb…Every form of violence inflicted upon a woman is a blasphemy against God, who was born of a woman.”

He added, “I apologize for the poor example yesterday,” and went on to discuss gender equality and his belief that women “should be fully included in decision-making processes,” concluding that “every step forward for women, is a step forward for humanity as a whole.”

Guess his own actions slapped some sense into him.