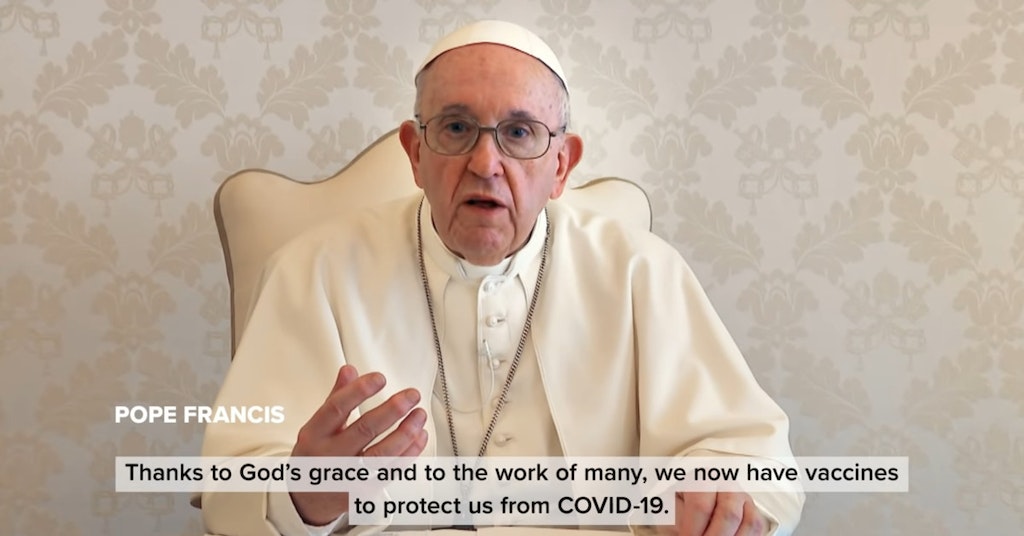 Pope Francis, along with six Cardinals and Archbishops, partnered with the Ad Council to release a public service announcement urging people to get vaccinated, calling it “an act of love” that will help protect the most vulnerable and all of humanity. They emphasized the massive sacrifice that healthcare workers have given in order to help the sick and create the vaccine, though Francis also makes sure to give proper credit to the G-man.

“Thanks to God’s grace and to the work of many, we now have vaccines to protect us from Covid-19,” he says. “They bring hope to end the pandemic, but only if they are available to all and if we collaborate with one another.”

Francis further made an effort to assure his followers that the vaccine is safe and effective, encouraging them to listen to “respected authorities,” likely referring to medical scientists who spent many years learning how to make vaccines for the benefit of the rest of us.

“Getting the vaccines that are authorized by the respective authorities is an act of love. And helping the majority of people to do so is an act of love,” Francis continues. “Getting vaccinated is a simple yet profound way to care for one another, especially the most vulnerable.”

Francis and the other Catholic leaders in the video also stressed the importance of ensuring that all people are granted access to the vaccine, likely referring to the massive gaps between the global North and the South, where heavily exploited nations are still struggling to get enough doses to cover demand. Due in large part to medical corporations, backed by the governments of rich countries, refusing to release the patents on their vaccines so that poorer nations can manufacture their own many millions of people who want the vaccine still can’t get it.

Meanwhile, in the U.S., doses expire as vaccination rates stall due to right-wing conspiracy theories, often perpetuated in Christian churches.

This PSA comes after studies found that people of faith were saying that encouragement from religious leaders could persuade them to get the vaccine, according to the New York Times.

“If you’re used to your pastor being a cultural critic or a social commentator, then whether he’s talking about the election or a social movement or the vaccine, you’re more likely to listen to him,” said Texas A&M University Professor Heidi A. Campbell. “You’re going to give whatever he says more street cred, because it comes with an air of divine authority, which he wouldn’t have if he was just a teacher or a news commentator.”

Reactions to the Pope’s statement have been entirely predictable, with people who are already vaccine-positive praising him for the PSA and U.S. evangelical Christians, who already consider Francis to be the devil, hating it.