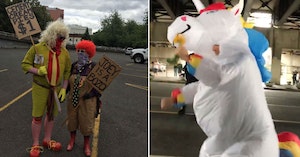 If you live in or around Portland, you’ve probably been tense for weeks waiting for the planned Proud Boy/white supremacist rally/”protest” on Saturday that was purportedly supposed to be a demonstration against how evil and dangerous antifa (short for anti-fascists) are. Indeed, people following traditional anti-fascist action techniques showed up in droves, but they were joined by others who took a different approach in counter-protesting the rally planned by far-right nationalists.

Thankfully, only minor injuries were reported, including from one woman dog-piled by police for spitting in their general direction. There were some tense moments and one report of a literal hammer-throw, but mostly, the day was about counter-protesters showing just how fun it can be to demonstrate against fascism, whether via dance battles or the #bananabloc.

Here are some of our favorite videos and photos to come out of the day:

1. When your proposed domestic terrorists are better at dancing than terrorism.

3. And their official “Don’t Tread On Me” flag.

You can hear the police tellig people there is no permit to protest in the street as the “Banana Bloc” marching band plays on. This #portlandprotest feels like a literal circus. pic.twitter.com/BjdffO8y0j

5. This actual unicorn and their best friend, aggressive drummer.

6. These right-wingers shuffling shamefully away from an old lady asking them “why are you in my city?”

Passerby to a group of right-wing protesters: 'Are you antifa?' They answer no. 'So, what are you doing in my city?'#PortlandProtest pic.twitter.com/aY9ODiI6f3

7. The guy who walked through an entire contingent of Proud Boys telling each “f**k you,” but not the dog.

(He actually said “you’re cool” to the dog)

You can hear the police tellig people there is no permit to protest in the street as the “Banana Bloc” marching band plays on. This #portlandprotest feels like a literal circus. pic.twitter.com/BjdffO8y0j

I’ll be tweeting and drawing from the Proud Boys protest in downtown Portland today. Many counter-protesters are dressed in costumes to show they’re not afraid. The first people I met were “clowntifa” pic.twitter.com/fc1Onv5q3j