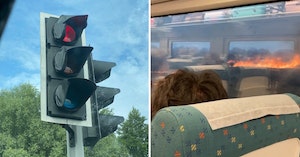 A massive heat wave hitting a large portion of Europe has resulted in wildfires spreading across multiple nations, melting infrastructure, heat-related deaths, and a series of terrifying images and videos for the rest of us to gape at.

Even in the U.K., much of which shares the same latitude as Canada, people are complaining that their local street lights, construction signs, roads, and their own footwear are melting under heat that reached over 40 degrees Celsius (104 degrees Fahrenheit) for the first time in recorded history.

Those who were in the Pacific Northwest of the U.S. last summer might find some of these images to be disturbingly familiar after what climate experts called a “heat dome” caused temperatures over 120 degrees Fahrenheit in the area. Our infrastructure also started melting, though at least we didn’t hear of airports shutting down because the runways became dangerous or see people sitting terrified on a train as flames raged on either side.

A total of 19 European countries were designated as being in “extreme danger” by the European Forest Fire Information System this week. Wildfires stretched all the way from Portugal to the west of Spain, to Turkey all the way on the east end of the continent.

All of this devastation sits squarely on the shoulders of those who caused climate change — fossil fuel companies, other massive corporations like Amazon, and the U.S. military, to name just a few culprits. That’s a fun thing to keep in mind as you stare in horror at the reports, photos, and video footage showing starkly just how bad climate change already is, and giving you a hint as to how bad it’s going to get.