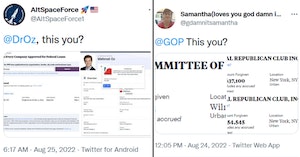 Following the announcement that President Joe Biden has ordered the cancellation of up to $20,000 in student loan debt for those who attended public colleges, the right-wing reaction was predictable, because they’d been telegraphing it for years.

They’ve been repeating the lie that the U.S. public will have to “foot the bill” for the debt forgiveness (there’s no bill) and claiming it’s unfair to people who don’t have student debt since Biden promised to forgive nearly all of this debt in his presidential campaign.

What they didn’t expect was a global pandemic that brought the economy to a crawl. In order to help business owners, the U.S. government responded with fully forgivable PPP loans, which were taken advantage of by large business owners, including a good number of Republican politicians. Now they have to contend with people finding the publicly available data on these loans when they complain about the student debt forgiveness.

Right-wing figures such as Steven Crowder and Rory Cooper have all been hit with those devastating two words after posting tweets complaining about the debt cancellations: “This you?”

Crowder, who hosts the right-wing podcast “Louder with Crowder,” took out over $70,000 in loans for his LLC, and the debt was forgiven in full including interest. This is significantly more money than the average student loan debt—but like all the rest of the right-wing complainers being called out like this—he has nothing to say about the free money he got from the government.

One of the biggest offenders is U.S. congressman Markwayne Mullin of Oklahoma, who took out almost $1.2 million in PPP loans across three of his businesses, all of which were forgiven. He also doesn’t seem to know that teachers are required to have at least a bachelor’s degree in order to obtain a full-time position in any U.S. state, and that most small business owners also hold a degree.

The amount forgiven for PPP loans over the pandemic total around $700 billion, while the student debt to be canceled under Biden’s plan is expected to be around $300 billion. Not only is the latter expected to cost less than half as the PPP program did, scammers stole $100 billion from the government via the business loan program and other pandemic relief efforts, according to the U.S. Secret Service.

Yet right-wing pundits, politicians, and other talking heads can’t seem to stop exposing themselves as hypocrites. Still, exposing their lies will hopefully allow a few individuals not completely poisoned by Fox News and worse outlets to realize that they’re not supporting good and honest people.

There is no shortage of conservatives to target with this tactic, which is fun and free.