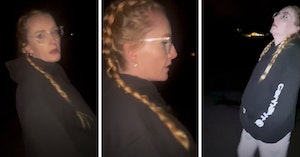 A video of a woman walking to the hospital while in labor has people debating about the U.S. healthcare system.

@kelskiller and her husband have been keeping people updated on their pregnancy journey via TikTok, and when she went into labor and things took an unexpected turn, that camera went on as well.

Husband Andrew was recording, leaving us to watch @kelskiller walking in the pitch black darkness.

“Babe what are we doing right now?” he asks her.

“Well, our car broke down half a mile from the hospital, so we’re walking because it costs $2000 to order an ambulance,” she replies. “So I’m in labor, just walking to the hospital. F—k it.”

The video cuts to a later clip, that shows her still walking through the darkness and seemingly in pain.

“My legs are soaking wet. It’s cold,” she says.

The new mom’s frustrations were laid out on the TikTok itself, which included hashtags saying “#america #healthcaresystem #istrash.”

There was some debate in the responses as to whether an ambulance was even necessary, or whether this was more of a situation of people not being prepared for an impending situation, but some felt @kelskiller should have been able to call an ambulance if that’s what she felt she needed at the time — but understood why she didn’t.

Fortunately, the couple made it to the hospital just fine and now have a healthy baby girl.

When asked why they didn’t just call an Uber for that half mile walk, @kelskiller replied: “Why didn’t I think of that.”