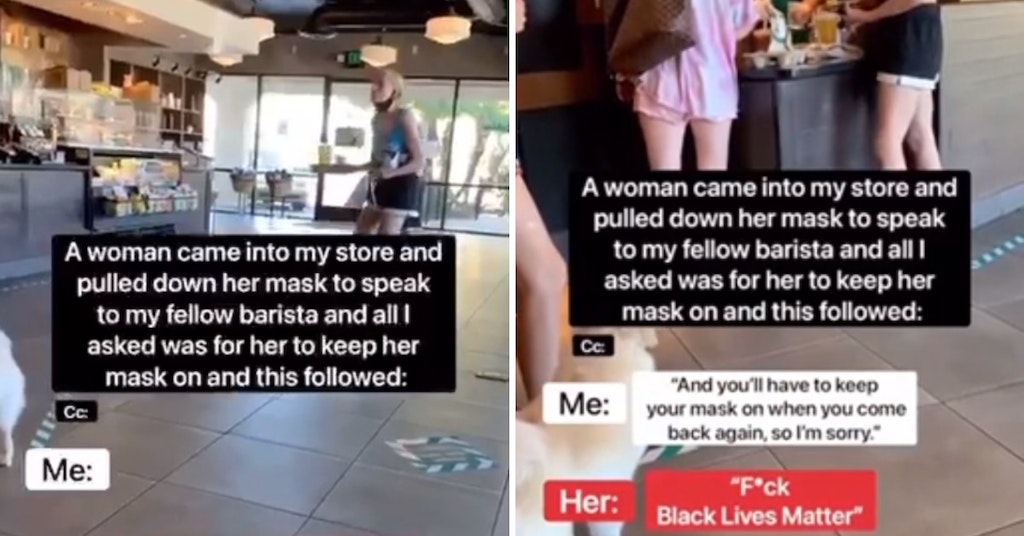 
An anti-masker ended up on Reddit after she yelled “f— Black Lives Matter” to a barista who told her that she needed to wear her Trump 2020 mask over her mouth and nose or she wouldn’t be served next time she came in. The woman reportedly came in with the mask on but pulled it down to make her order, which is the exact opposite of what you should do. The barista, a Black woman, corrected her on this and was met with full coronavirus denial and racism.

The video was bad enough to be featured on the Reddit forum "F--- You Karen," which seems appropriate.

The anti-mask woman appeared to have a problem with the barista's tone as the video started, saying that she's "not gonna listen to anything you say when you talk to me like that." The barista can be heard calmly and pleasantly explaining to her that she needs to wear her mask correctly.

"Okay, that's fine with me but next time when you come in I'm going to need you to keep your mask on," she says.

People taking issue with the "tone" of Black women who are saying things they don't like is a problem with a long history in the U.S. and a well-documented form of the intersection between racism and misogyny.

Not missing a beat, the anti-masker accused the barista of "discriminating" against her for being a Trump fan.

"I know it's because you're discriminating against me because I'm a Trump supporter," she says. The barista continues to explain the Starbucks mask policy in her best customer service voice, at which point the anti-masker shares her true feelings: "F--- Black Lives Matter."

She then has the nerve to demand a straw and sugar packets, which the barista cheerfully provides, but again reminds her that next time if she doesn't wear her mask right, she won't get any coffee. This sets the anti-masker off even further.

This seems odd considering the fact that she came in wearing a mask, probably due to the fact that it's Starbucks policy regardless of whether anything is a law.

"Okay, next time you come in, I can't help you," the barista says. Despite her gentle voice, the anti-masker becomes increasingly agitated.

At this point the anti-masker is shouting and the barista has to tell her to leave the store, which she does, but not before shouting "f--- you" and another "f--- Black Lives Matter."

The other customer in the store can be heard apologizing to the barista on behalf of the anti-mask Trump supporter before the video cuts out.

According to The Daily Mail, the video of the incident went viral on TikTok, prompting the anti-masker to claim that she filed a police report against the barista for "defamation" on her Instagram account, and gloating that "she's going to lose her job." On the contrary, Starbucks supported their employee in a statement about the video.

"We expect our partners and customers alike to foster a welcoming Third Place environment, and this behavior is not welcome in our stores," they wrote. "Our focus right now is providing support to our partner who demonstrated tremendous composure during a very difficult interaction."

Black workers should not have to remain composed while dealing with profoundly racist individuals telling them their lives don't matter, but many commenters are impressed regardless. But they're also not missing the chance to mock the Trump supporter.