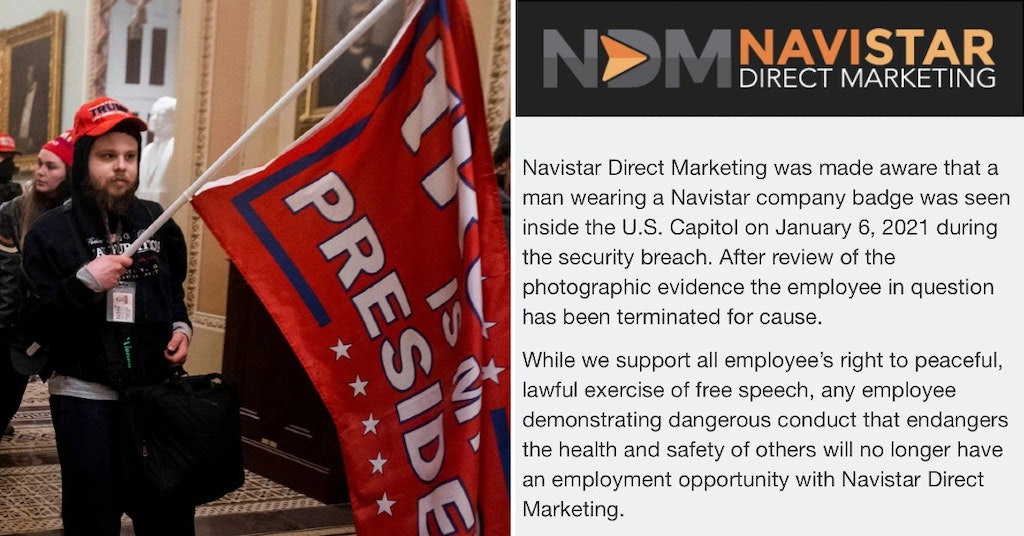 
A Maryland marketing firm has confirmed that a man photographed taking part in the pro-Trump storming of the Capitol on Wednesday was indeed one of their employees—before they fired him, that is. The bearded and unmasked individual was featured in one of the more prominent photos with a MAGA hat and flag and his work ID badge on full display.

By the following day, Navistar Direct Marketing had released a statement announcing that he had been "terminated for cause."

"While we support all employee’s right to peaceful, lawful exercise of free speech, any employee demonstrating dangerous conduct that endangers the health and safety of others will no longer have an employment opportunity with Navistar Direct Marketing," the company wrote in a statement posted to Facebook.

They also commented that they are "cooperating with authorities," so he might be in for something worse than a pink slip.

The Trump supporter, who probably should have seen this coming, was photographed multiple times next to one of the most visually bizarre insurrectionists -- the man they call the "QAnon shaman" who wears goat horns and sports white nationalist tattoos. Jake Angeli is a popular figure within the networks around this conspiracy theory, which inspired many of the people who were at the Capitol yesterday.

According to a CBS affiliate in Baltimore, 82 people identified in photos and video footage from the insurrection have been arrested so far, with at least nine residing in Maryland. Trump supporters came from all over the nation to take part in the riots that the outgoing president incited, and soon discovered that fighting against the state has consequences.

Being fired and/or arrested would still be a better fate than that of the four people who died, one of whom is rumored to have suffered a "medical emergency" after accidentally tasering themself. While any death is tragic, few are finding compassion in themselves for the guy who got fired for wearing his work badge to a coup.

"I mean politics aside, you’d be fired from any job for breaking an entry while wearing your job uniform or badge," one commenter pointed out. "You’re representing a brand while doing whatever lmao."