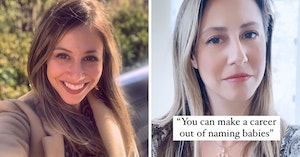 Professional Baby Namer Charges Couples $10,000 To Come Up With Names

Did you know that “professional baby namer” is an actual job? Yes, people are paying others to find the perfect names for their kids, and it’s pretty lucrative.

According to Daily Mail, Taylor A. Humphrey, a 33-year-old from New York, is raking in thousands of dollars by choosing baby names.

Humphrey is the founder of “What’s in a Baby Name,” a boutique consultancy that takes the pressure off parents when it comes to naming their new bundle of joy. Humphrey offers everything from tailor-made lists to a full-service baby-naming concierge.

Her services start at $1,500 for a custom list of options but can cost much more, depending on the job.

Humphrey said that for $10,000, she will come up with names that are “on-brand with a parent’s business,” The New Yorker reported.

“If you look at the most popular baby names, it’s such a telltale sign of our cultural values and our aspirations,” she told the magazine.

Humphrey, who also works as a doula, goes above and beyond for her clients. The names Humphrey picks aren’t at all random. They’re usually inspired by answers given by the parents via a detailed questionnaire. She also spends hours and hours conducting genealogical investigations to find old family names.

In the last year alone, she has named more than 100 children, and has counseled parents throughout the entire process.

Recently, she came up with the name “Parks” for a couple, and it has the sweetest story behind it. The name was inspired by a town called Parker, where the couple had their first kiss.

There was even a situation where Humphrey talked a mother out of changing her daughter’s name. The little girl’s name was Isla, and the mother was concerned that people would keep mispronouncing it. Humphrey was compensated for convincing the mother to stick with the name.

She said name regret has become more common in recent years. In a TikTok video, Humphrey discussed the reasons a parent may end up regretting the name they’ve chosen.

Still, she doesn’t believe in mistakes when it comes to naming your babies.

“There are no mistakes in baby naming,” she said. “That’s my mantra. What if your child is meant to change the meaning of the name they have? There is a chance for transmutation and I think that’s really beautiful.”

The professional baby namer currently has a waitlist of clients looking to work with her. But you don’t have to join the line to get Humphrey’s expert tips and advice.

The 33-year-old uses her TikTok account to share advice with her thousands of followers. She even helps them pick out names without the $1,500 pricetag.